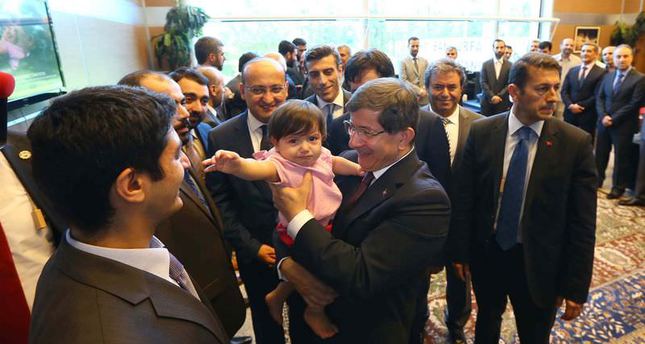 by Daily Sabah Sep 29, 2014 12:00 am
Veysel Can, one of the 49 Turkish consulate hostages held captive by the Islamic State of Iraq and Sham (ISIS) in Mosul, who is also an officer of the Gaziantep Police Department's special operations unit, has said they were released after a "great operation" conducted by Turkey's spy agency, refuting an article published in the Gülen Movement's Zaman daily where he was purported to have said the hostages were made to wait for four hours at the border to be retrieved by MİT officials who were unaware of an operation.

Can, who was held captive for 101 days, expressed discomfort over the misleading news that was published on the mentioned media.

Forty-six Turkish citizens – including diplomats, consular officials and their families – and three Iraqi citizens working for the consulate were kidnapped from the Mosul consulate on June 11, a day after the self-proclaimed ISIS took control of Iraq's second-largest city. The Turkish hostages who had been held by ISIS militants were rescued and brought back to Turkey on Sept. 20.

Speaking to Anadolu Agency (AA), Can retold his story of the release to one of the agency's reporters and corrected the misquotations that were published in Zaman.

Zaman published an article on Sept. 25, five days after the hostages were freed, carrying the quotations of Can, which read, "We had to wait for four hours at the border for the officials to come and pick us up, since the MİT was not informed about our release." The article, which aimed to degrade the success of the operation, was later found to be carrying false remarks by Can, as he reiterated that they were rescued by a huge operation conducted by the Turkish intelligence agency.

"We kept changing locations during our period of captivity, and every step we took was carefully traced by MİT officials. We were rescued thanks to the policy followed by our president, stable attitude of our prime minister and foreign minister and the efforts of our MİT undersecretary."

Stressing that the truth was distorted in the Zaman article, Can denied ever saying that the MİT had arrived belated at the border to seize the hostages because they were not "informed" the hostages were released.

"A reporter arrived at our house after our release to share our joy at our reunion with our families. But I was disappointed to see how they misinterpreted what we said."

Deeming the move to misquote his words as a means to overshadow the operation conducted by Turkish officials, Can said he condemned such an approach given that the operation was a well calculated and detailed one.

"We would have been beheaded if it weren't for our government," Can said. He also said he was visited by the Turkish President Recep Tayyip Erdoğan and was given permission to take a month-long leave, which he said he very much appreciated.

Prominent figures and various media outlets of the Gülen Movement – which has been accused of attempting to overthrow the government through its agents in the judiciary and national police department – triggered criticisms from the public after raising various accusations against the government regarding the hostage crisis. Despite calls from both the president and prime minister to avoid the use of provocative language when covering the hostage crisis, Gülen-linked media constantly questioned why government officials restrained from calling ISIS a terrorist organization. The movement subsequently drew the ire of people for putting the lives of captive Turks in jeopardy. Following the release of hostages, President Erdoğan said that Turkey was ready to lend military support to the coalition against ISIS, which he described as a "bloody terrorist organization."

Prime Minister Ahmet Davutoğlu has recently criticized the Gülen Movement for coming up with various false claims regarding Turkey's rescue of 46 citizens from the hands of ISIS. "You all know the lies they told about our intelligence chief. These days, this organization [Gülen Movement] is trying to humiliate our rescue operation and also trying to find something to accuse us of. These people do not know how to share the people's joy and sorrow, but we'll teach them how to enjoy good news with the nation," Davutoğlu said.