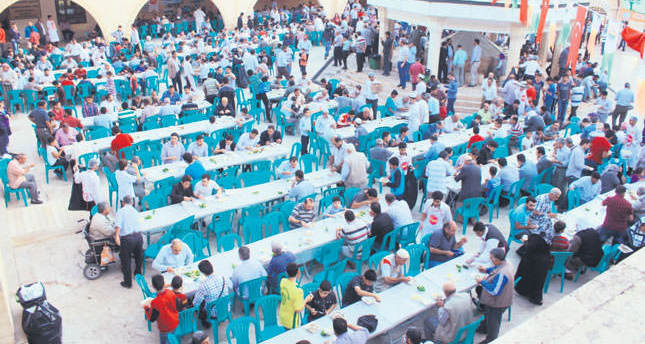 The eighth Abraham Meetings organized by the Şanlıurfa Municipality once again tried to send a message of peace. Mayor Güvenç said the main aim was to build bridges through social awareness

While ethnic and religious conflicts continue in the Middle East, Turkey's southeastern province of Şanlıurfa hosted the eighth International Abraham Meetings to bring humanity together in the Prophet Abraham's deep profundity over the weekend with the participation of high-level state officials, local and international individuals, Turkish and foreign diplomats and representatives of non-governmental organizations.

Şanlıurfa, an ancient city that has been home to many civilizations, is known as the home of the Prophet Abraham, who is the father of Judaism, Christianity and Islam. The people of the city believe that two good traits have been passed down from the Prophet Abraham: hospitality and generosity. According to legend he was never seen eating without a guest at his table and this tradition still survives in Şanlıurfa today. The expression, "Abraham's Table" is widely used and refers to feasts given by generous people. The main aim of these meetings is to bring all foundations and associations bearing the same virtues as the Prophet Abraham such as hospitality, charity, goodness and generosity, together in Şanlıurfa.

This year's event was organized by the Şanlıurfa municipality, and its slogan was "A Walk to the Heart of Fellowship." Speaking at the opening of the two-day event, Şanlıurfa Governor Celalettin Güvenç emphasized that the main intention of the event is to build bridges of peace between the people of the world and to bring all of humanity together around a movement of social awareness. "The gatherings are an effort to revive values that have almost been lost, such as hospitality and generosity, in the 21st century in light of the Prophet Abraham's teachings, emphasizing humane values and to prove to all people that hope for the revival of these values has not yet been lost," he said. Güvenç underlined that the annual meetings have become more meaningful since more than 150,000 Syrian refugees escaped from Islamic State of Iraq and al-Sham (ISIS) brutality and arrived in Şanlıurfa. Güvenç added that an "International Goodness Confederation" should be established that includes the participation of more countries and representatives of international organizations.

The two-day conference started on Friday with an event titled, "A Walk to the Heart of Fellowship." The walk started at the city center and ended in front of the shrine of the Prophet Abraham. Following the walk, several people and institutions were awarded "Goodness Awards" for their contributions. On the morning of the second day of the event, the Şanlıurfa municipality handed out food and drink to 15,000 people after morning prayer. As part of the meeting, a symposium titled "The State and Civil Society's Role in Social Peace and Social Solidarity" was held. A fair organized by aid agencies also took place at the pool of Abraham (Balıklıgöl), where the Prophet Abraham is believed to have been thrown into a fire by King Nimrod and miraculously escaped death. The meeting ended with a concert by Lebanese singer Maher Zain.