Palestinians treated in Turkey long for eid at home 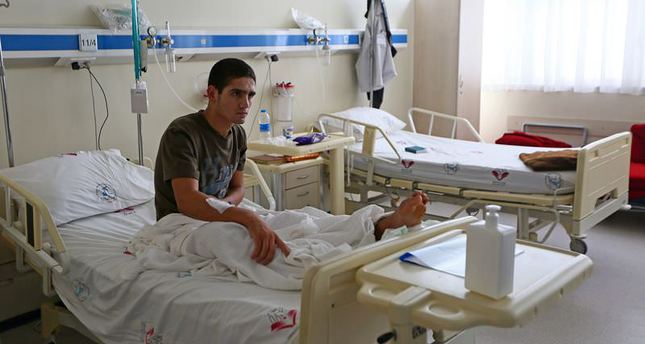 Turkey reached out to Palestinians injured in this summer's brutal offensive by Israel in the Gaza Strip, having airlifted 102 Palestinians to Turkey for treatment since August.

Still under treatment at Turkish hospitals across the country, Palestinians have expressed their sadness at missing the upcoming Muslim Festival of Sacrifice or Eid al-Adha that will be celebrated in the Muslim world later this week. The festival is synonymous with family gatherings and joy, two things Gazans yearn for in the wake of Israel's indiscriminate assault in Gaza, where most people lost relatives and their homes in the airstrikes.

Mahmoud Sokkar lost a leg when an Israeli missile landed on a street he went to on "a day of truce" between Hamas and Israel. He was at the hospital, having his leg amputated during the previous Muslim festival of Ramadan in July. Sokkar says he is determined to celebrate Eid al-Adha with his family who accompanied him to Turkey, albeit in a hospital bed in western Turkey's Afyon.

At the same hospital, Alham Abughori tends to her son Mohammad, who was injured in the Israeli attacks. Like Sokkar, her son spent the previous eid in hospital. She said her son was not able to walk when he was admitted to the Turkish hospital earlier this month but he has rapidly recovering now, taking small steps without support. "We want to return to Gaza and celebrate eid as a family. His brothers wait for us in Gaza," she says. Young Mohammad who was crippled in the Israeli attacks on Gaza, says he missed playing football most.

Ali Abdrabbou witnessed the death of his mother and eight other people in Israeli bombings. He was lying unconcious at a Gaza hospital during Eid al-Fitr in July after shrapnel pieces from a missile pierced through his leg. He was wheelchair-bound and suffering from psychological trauma when he arrived in Turkey. After weeks of treatment, he says he now feels better and can walk. "I miss my family so much. I lost my mother. It will be a sad Eid for me," he says.

Father of Mohamad Zakrya Shikshik, 6, was killed by an Israeli sniper, right before his son's eyes. The boy has had a speech impediment since then and is being treated for the wounds to his hands and head which he sustained when Israeli tanks fired on their house. Clutching a picture of him, Mohamad lays in a hospital bed in the western Turkish city of İzmir. He says his father is "in heaven" now. The boy's mother, meanwhile, gave birth to another boy in Gaza. Mohamad's new brother is named Zakrya, after his deceased father. The boy is accompanied by his grandmother at the hospital. The grandmother is thankful to the Turkish government for its aid to wounded Palestinians but her hopes for a better life in Gaza seem crushed. "Israeli planes always circle over us in Gaza. We await death at any moment. People can't do anything. They have no jobs, no lives," she says.

Amany Mohamed Abo Taha was left partially mute after Israeli rockets hit their home on August 22, killing his mother. His father was not at home at the time of the attack. "My wife and relatives were at home. Apart from my wife, I lost four relatives and four others were injured. Amany was among them. Since then, he always asks about his mother and barely speaks," the father Muhammad Abo Taha says.

Turkey has so far received 102 Palestinians wounded in Israel's 51-day offensive this summer that left some 2,147 people dead and injured 11,000 Palestinians.