Aid pours in for Syrian Kurds taking shelter in Turkey 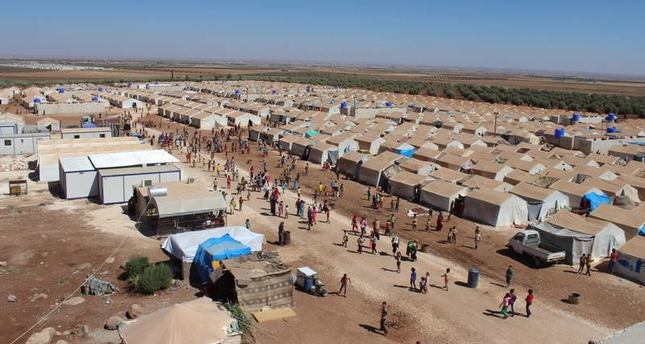 Turkish government and nongovernmental organizations mobilize resources for over 168,000 Syrian Kurds taking shelter in Turkey with humanitarian aid flowing to the border town where they are accommodated

Turkey is struggling to cope with the influx of Syrian Kurds fleeing their hometown Kobani where intense clashes between Syrian Kurdish militants and the Islamic State of Iraq and al-Sham (ISIS) are underway.

Since Sept. 19, over 168,000 displaced people have arrived in Turkey from Kobani, amassing in Suruç, a Turkish border town in the province of Şanlıurfa located opposite the Syrian city. The steady flow of the displaced has ceased in recent days though there are occasional new arrivals while others going back to Syria huddle on the border. Şanlıurfa Governor, İzzettin Küçük, announced yesterday that the border crossing in Suruç was closed after the security situation deteriorated on the Syrian side, and Syrians wanting to return home will not be allowed through the crossing. Küçük said Syrians were safer in Turkey, and even though they were allowing their return to Syria to visit their relatives, especially for the Eid al-Adha holiday, the declining security required a shutdown of the crossing. The governor did not state when the crossing will be reopened, but it is likely that it will be reopened soon as the clashes in Kobani are forcing more families to flee their homes. Turkey pursues an open-door policy for displaced Syrians although it occasionally blocks access when the spillover of violence from its southern neighbor threatens Turkish border towns. Last week, three people were injured when mortar shells from Syria landed in Suruç.

Currently the only country providing such hospitality to displaced Syrians, Turkey has taken action by setting up tent camps in Suruç for hundreds of thousands of people, though many still remain in parks, empty lots and other places in the town as the sudden flow has posed an accommodation challenge for the Turkish authorities. Though proper accommodation services are not available yet for all Syrian Kurds in Suruç, humanitarian aid keeps flowing into the town as Turkish charities and state-run aid agencies descend on the town with trucks loaded with food and basic amenities for the displaced.

Mobile kitchens set up at tent camps in Suruç offer free bread and three meals daily for 5,000 people while 16,000 loaves of bread are distributed to Syrians.

The Turkish Prime Ministry's Disaster and Emergency Management Authority (AFAD) coordinates the aid efforts as well as registration of Syrian refugees, including Syrian Kurds, admitted into Turkey. AFAD workers from around the country were dispatched to Suruç to assist in the efforts for the displaced Syrians.

Meanwhile, the Turkish Ministry of Health deployed ambulances along the border for medical emergencies for the displaced arriving in Turkey after an arduous journey on foot. Crews in 30 ambulances comb the lengthy border around the clock to help the sick and wounded Syrians. So far, 425 injured Syrians were admitted to Turkey and they were transferred to nearby hospitals. The ministry also provides vaccines for Syrian children admitted into Turkey.
Apart from state-run agencies and charities, locals in the border towns also provide aid to desperate Syrians. Many Kurds from Kobani have relatives living in the border towns while Turkish locals have hosted those with no relatives and cannot be accommodated at already crowded camps in their homes. In Hakkari, a southeastern Turkish province, residents of a village launched a noteworthy campaign. They donated 100 sheep they bred for sale for the upcoming Muslim festival of sacrifice Eid al-Adha, in which livestock are slaughtered. The sheep will be sold to raise funds for Syrian Kurds.

Turkey, which already hosts nearly 1.5 million Syrians who have fled the conflict in their country, will likely face a rise in the number of Syrians taking shelter there as long as the instability stemming from the civil war remains, according to experts.

As the aid campaigns for Syrians gain pace, so do the rallies for them and against ISIS. In Diyarbakır, a neighboring province of Şanlıurfa, businesses were closed yesterday after a call from the opposition Democratic Regions Party (DBP) that draws considerable support from the province. The Diyarbakır municipality, which is run by the Peace and Democracy Party (BDP), a sister party of the DBP, joined the protest and shut down the public transportation buses in protest of ISIS. It was the first time businesses were closed in the province in two years. In the past, the shutdown of businesses was a form of protest by groups linked to the terrorist organization PKK, which claims to seek Kurdish self-rule in the southeast.

The DBP, BDP and other opposition parties that advocate more rights to Kurds and peace with the PKK, often stage rallies across Turkey to protest against ISIS and show solidarity for Syrian Kurds. The rallies sometimes turn into violent riots with protesters armed with Molotov cocktails clashing with police. The three opposition parties were criticized by government ministers over their involvement in riots in Suruç. An opposition lawmaker came under fire when she was photographed hurling stones at soldiers attempting to disperse the rioting crowd on the border.