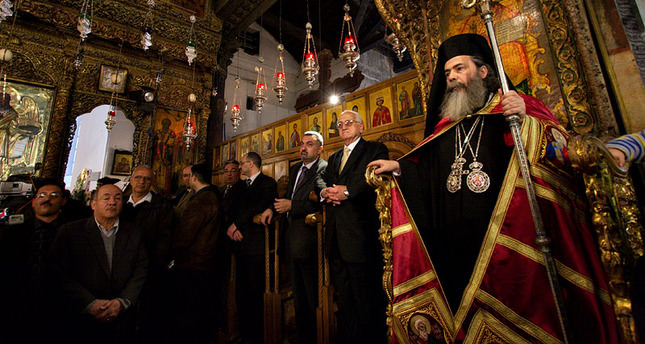 by Daily Sabah Oct 02, 2014 12:00 am
Turkey's Greek Orthodox community is hopeful of reopening a seminary in Istanbul's Heybeliada island following President Recep Tayyip Erdoğan's remarks on the issue. Erdoğan recently said that the seminary could be opened if Greece improve the religious affairs of Muslims in Greece.

The seminary, that has been a source of contention for decades, was closed in 1971 by the Turkish state under a law banning religious training by non-state entities.

Established in 1844 for training Greek Orthodox clerics, the opening of the seminary remains a thorny issue in terms of rights of minorities in Turkey.

Turkish media was allowed to visit the closed Halki seminary in Istanbul's Heybeliada for a trip organized by Turkey's Assocation of Greek Foundations (RUMVADER) on Tuesday. Rev. Dositheos Anagnostopoulos, a press spokesman for Fener Greek Orthodox Patriarchate of Istanbul, told reporters that they anticipated that the government would allow the reopening of the school "at any time." He said the seminary was important and an opportunity for Turkey to show a level of religious tolerance. He stated that the Orthodox patriarchate needed clerics who grew up in Turkey, speak Turkish and understand Turkey.