Close to 2 million refugees an overbearing burden for Turkey 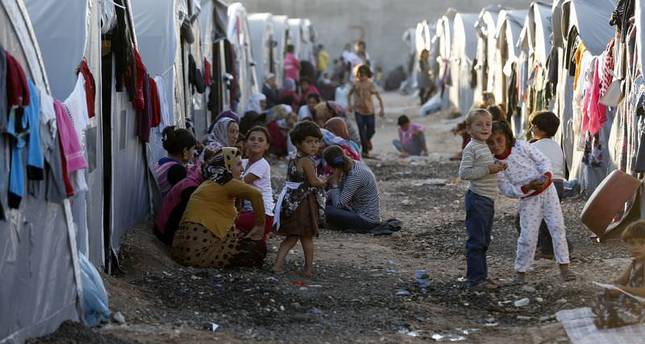 Even though conflicts in the Middle East have saddled Turkey with an influx of refugees nearing 2 million people, the country is determined to continue maintaining its open-door policy

The number of refugees from Syria and Iraq pouring into Turkey is larger than the population of many cities in the country, with the number nearing 2 million.

Ayhan Sefer Üstün, head of Turkish Parliament's Committee of Human Rights, said the number of refugees in Turkey is more than the population of several small European countries. He pointed out that 130,000 people have been admitted to European countries from conflict-ridden countries in the Middle East in the past four years, adding that this was lower than the number Turkey received in one week in the wake of ISIS attacks on Kobani, Syria. He said that the country is way more advanced than Europe and the West overall in terms of services to refugees.

Üstün said that Turkey hosted the displaced foreigners in modern facilities that were above world standards despite the high number of refugees. "The government spent a considerable amount of resources on those people and the public made significant donations to help the displaced," he said.

Although the ISIS threat in both Iraq and Syria has added to Turkey's woes in terms of a rise in the number of the refugees coming to its border, the Turkish government has vowed to pursue an embracing policy for Syrians and Iraqis. Government officials have made the situation top priority, stopping the flow by delivering humanitarian aid to internally displaced people in its southern neighbors and even setting up tent camps in regions far from the conflict. But resistance to admitting more refugees is often overwhelmed by the government's pursuit of a humanitarian policy when it comes to its neighbors. For instance, Syrian Kurds fleeing Kobani had to wait on the Turkish-Syrian border for only a few hours before the country swiftly opened the border crossing and deployed teams delivering humanitarian aid.

Pırıl Erçoban, an official from the Turkish nongovernmental organization Assocation of Solidarity with Refugees (Mülteci-Der) praised Turkey's approach to refugees, particularly those from Syria, as well as backing efforts for the implementation of new laws to address the plight of refugees. She said, however, that legal loopholes exist, particularly in terms of temporary protection status and urged the Turkish government to offer them refugee status as they were not in Turkey for economic reasons, but rather to escape persecution in their own countries.

Erçoban said that official figures in August show the number of Syrians in Turkey to be currently around 1.4 million with 808,000 of them registered. Unofficial figures claim the number has exceeded 2 million. "Even though this is an unofficial figure, it must be around that point after nearly 150,000 people [fleeing Syria's Kobani] took shelter in Turkey over the past few weeks," she said. She added that Turkish officials succeeded in allowing only civilians into the country and registering them as soon as they step into Turkey.

Turkey has one of the world's largest refugee populations. Erçoban said those from Syria were not granted refugee status and were not able to take asylum in third countries as a quota for their accommodation in third countries was far below their total number. "Thus, many people have to stay in Turkey deprived of many rights for a long time and without a permanent solution to their status. So they risk their lives on dangerous and illegal journeys to Europe," she said.

According to Erçoban, Turkey achieved progress in drafting laws better accommodating the rights of refugees. "For instance, asylum seekers had difficulty in accessing health services, but now those applying for international protection are granted health insurance and are therefore exempted from paying for health services. In the past, Turkey's policy was stopping the influx on the border, but now it is obvious that authorities are working on a temporary protection status. Despite several shortcomings, Turkey exerts efforts to offer a safe and secure environment," she said. Erçoban said Turkey should adopt clear policies based on human rights and dignity for refugees instead of policies drafted along the way. "Refugees should be granted more rights to help them live on their own rather than living off aid," she said, calling upon Turkish authorities to speed up efforts to grant them working permits.