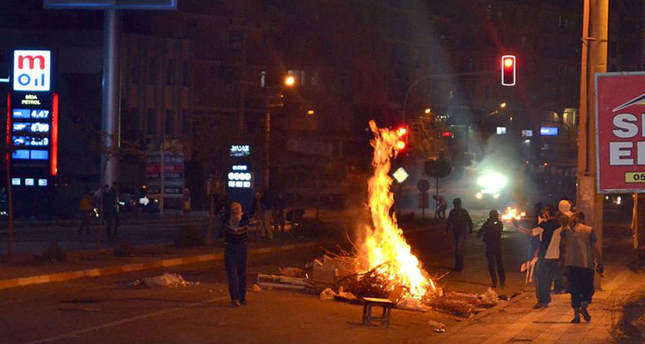 by AA Oct 08, 2014 12:00 am
The death toll from pro-Kurdish protests in Turkey rose to 33 Saturday after a man succumbed to injuries he received during an earlier clash with the police, authorities said.

Yunus Aktaş, 18, passed away at a hospital in the eastern province of Van on Saturday. He was hit in a random shooting Thursday by unidentified attackers at the town of Tusba.

The protesters claim the Turkish government was doing nothing to halt the advance of ISIS in the Syrian town of Kobani, also known as known Ayn al-Arab, just across the Turkish border.

The demonstrators had clashed with police, closed roads to traffic by setting up barricades and attacked security officers. The security officers used tear gas and water cannons to disperse angry crowds.

Protests -- now largely subsided -- raged mainly on Thursday and Friday in different parts of the country: 12 in Diyarbakir, six in Mardin, five in Siirt, four in Gaziantep, two in Van along with one in each of the provinces of Batman, Muş, Adana and İstanbul, respectively.

Most casualties occurred in clashes between supporters of the outlawed Kurdistan Workers' Party, or PKK, and a group reportedly belonging to the Islamist Kurdish political party, the Free Cause Party, or HUDA-Par.

PKK is listed as a terrorist organization by Turkey as well as by the U.S. and the EU.