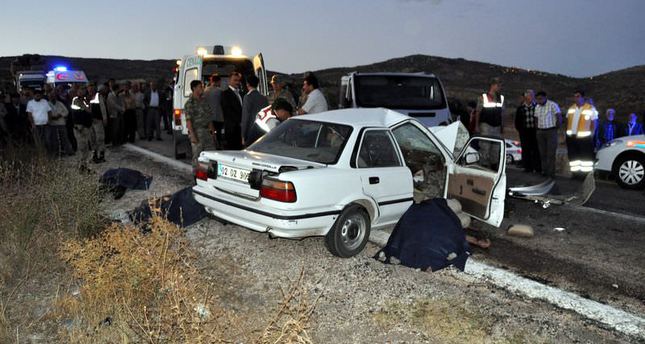 by Daily Sabah Oct 08, 2014 12:00 am
Eid al-Adha, the Muslim festival of sacrifice, turned tragic for many as accidents, common during the exodus of thousands from big cities, killed 68 and injured 367 others over the holiday weekend.

Hitting the roads on Oct. 3, the eve of the four-day holiday, motorists failing to heed traffic rules were involved in crashes across the country. The death toll stood at 68 as of yesterday, the last day of the holiday during which thousands living in western Turkey return to their hometowns in the inner regions of Turkey. Experts warn that figure may rise with several among the injured having life-threatening wounds.

Most accidents stem from speeding, with people rushing to make it to their destination as soon as possible to spend their holiday there as long as possible.

Authorities took measures against traffic accidents, which are common during eid travel. All members of the Turkish National Police's traffic department worked throughout eid, while police officers from other units were authorized to inspect of cars and motorists. Apart from cars, buses were subject to increased inspections, especially for those using a type of illegal oil that caused a number of accidents in the past due to its flammability. Despite measures, an average of 12 people were killed on each day of the holiday. The death toll in the previous Eid al-Adha holiday - which lasted nine days - was 131.

Albeit speeding played a key role in traffic accidents, it was unlikely for those traveling on the TransEuropean Motorway (TEM), a major route in the northern Turkey, as the traffic moved at a snail's pace for returnees to Istanbul. Just like the mass exodus on Oct. 3, the motorway's stretch near Istanbul saw long lines of vehicles, sometimes reaching 50 kilometers, yesterday. Minor accidents along the route further congest the already slow-moving traffic.

Istanbul, the country's most populated city, is expected to witness another influx this weekend as well since those merging their holiday with annual paid leaves will conclude their vacation and return to the city in mass.