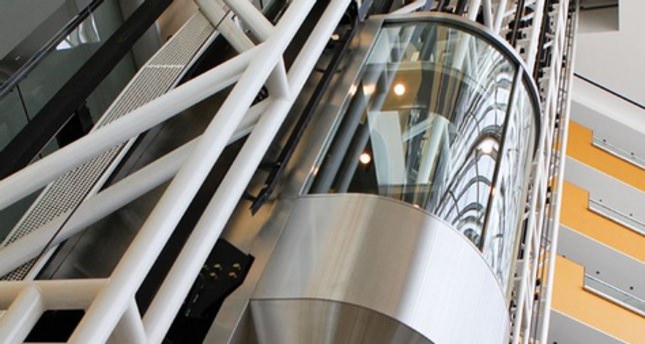 The state of elevators came into the spotlight after an elevator crashed to the ground from the 32nd floor at a construction site in Istanbul's Mecidiyeköy district on Sept. 6, killing 10 workers aboard. An investigation found the elevator was faulty and four people were arrested on charges of involuntary manslaughter, including elevator technicians responsible for its maintenance.

Speaking to reporters yesterday, Erol Ferhat, head of the department overseeing safety of industrial products at the Turkish Ministry of Science, Industry and Technology, said out of 152,000 elevators inspected in Turkey in 2013, 63 percent were given a "red label," meaning they were unsafe. Ferhat said the figure indicates that the most elevators are not fit for use.

"Generally speaking, elevators are products [that] we found safety violations in most and therefore, we issued fines for many," he said.

According to official figures, there are about 350,000 elevators currently operating in Turkey. Ferhat stated that the red label issued for an unsafe elevator shows that it requires immediate maintenance and poses a risk to passengers. The ministry official said they also issued yellow labels for elevators that do not require immediate maintenance but might require it soon.

Ferhat pointed out that local municipalities regularly inspect elevators and the ministry conducts occasional checks to verify those inspections. He warned people residing in buildings with elevators to notify authorities if maintenance of an elevator is not done despite it being given a red label.

Although regular inspections are done to prevent accidents related to elevators and other potentially hazardous equipment, the accidents continue to claim lives, mostly due to negligence by companies putting profits before work safety.

The Turkish government recently readied an action plan to tackle workplace accidents and elevator accidents. Under the new plans, all elements of a building's construction, from elevators and scaffolding to electricity and building material, will be brought into line with International Labour Organization (ILO) standards. The elevator that crashed to the ground in Mecidiyeköy from the 32nd floor did not have a mechanism to soften its landing according to the experts. With the government's new regulations, the elevators would be required to have equipment that protect the people it carries.

Elevators are required to undergo maintenance once a month, but in skyscrapers like the one under construction in Mecidiyeköy, the elevators are legally defined as "transportation equipment" and are not subject to regular maintenance due to legal loopholes. Their maintenance is at the discretion of the company undertaking job safety at the construction site. New regulations will hold job safety experts liable for the inspection of construction sites and authorities will regularly inspect the sites. Elevators will also undergo more endurance and other relevant tests after their installation. Companies not fulfilling obligations regarding the safety of elevators will be shut down.

According to a comprehensive report by the Chamber of Mechanical Engineers, most elevators in the country do not have the CE sign of the European Economic Area that indicates a product's compliance with high standards for health and safety. Yet, an average of 10 million people ride on these elevators daily. According to statistics, 70 percent of lethal elevator accidents in Europe happen in Turkey. An average of 200 accidents occur in the country ever year and 20 percent of them involves fatalities.