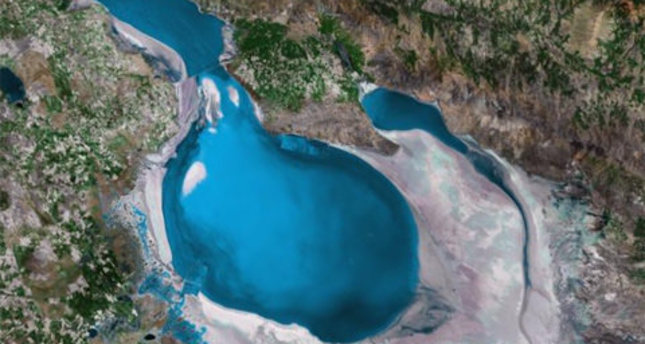 by Daily Sabah Oct 09, 2014 12:00 am
Forestry and Water Affairs Minister Veysel Eroğlu has dismissed reports that Lake Tuz, Turkey's second largest lake, faces a risk of shrinking due to drought.

Answering reporters' questions on the issue, Eroğlu said Turkey occasionally experiences a drought every seven or 10 years, as it is located in a region with a semi-arid climate, citing droughts in 1984, 1994, 2000, 2007 as well as a drop in precipitation of 15-20 percent in 2014. "But the rainfall started, so a drought in Lake Tuz is out of the question. It didn't dry up in this year's period of drought," he said.

Eroğlu added that evaporation in different periods of the year leaves salt layers behind and that the evaporated water was replaced with salt. He said that they don't see any danger of drying up as the rainfall has already started, claiming the situation was under control.

"We carried out large-scale projects to preserve wetlands and revive those that had dried up and saved countless wetlands and lakes," Eroğlu noted.

The lake, named after salt in Turkish, is located in central Turkey and provides the majority of the country's salt resources, being one of world's largest hyper-saline lakes. It had already shrunk by 50 percent over the past four decades due to exploitation of its resources. Scientists tracking changes in the lake to prevent further shrinkage had called on the government to draft a feasibility report to work on measures to protect the lake.

Drought concerns alarmed environmental activists and farmers, but the heavy rainfall in the past months, after a lengthy dry spell, alleviated concerns. The government assured the public that action plans are ready in case of a drought, particularly for farmers whose crops were affected.

To address future drought concerns, the government initiated the "1,000 Artificial Lakes in 1,000 Days" project in 2012. Through artificial lakes, one billion cubic meters of water is to be stored and used for the irrigation of 2.5 million acres of land used for cultivation.