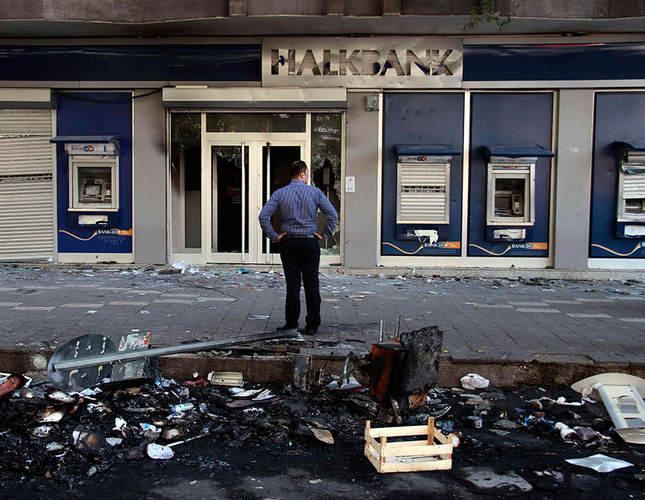 by Daily Sabah Oct 10, 2014 12:00 am
Turkish politicians and NGO's gave statements on Friday condemning violent protests that took place throughout Turkey based on the ISIS siege and attacks on the Kurdish populated Syrian town of Kobani.

All messages pointed out the dose of violence and intolerance that turned protests into looting shops, burning public buses, attacking public servants and armed conflicts between pro PKK and anti PKK fanatic Kurdish groups that led to the loss of 31 lives.

According to a Friday's statement made by AK Party Deputy Chair and Spokesman Beşir Atalay, only 1 person out of 31 died with a police bullet. Many academicians and journalists have also expressed their concerns on armed clashes between pro PKK and anti PKK fanatic Kurdish groups, pointing out to the similarities with the atrocities of mid 1990's.

Turkish President Recep Tayyip Erdoğan: "Turkey is not a country that determines its domestic and foreign policy with the actions of bandits"

Turkish President Recep Tayyip Erdoğan spoke on Friday in Trabzon, northern Turkey, condemning violent protests and stating that necessary actions would be taken against those who were responsible.

"Turkey is not a country that determines its domestic and foreign policy with the actions of bandits" Erdoğan said.

Criticizing main opposition CHP leader Kemal Kılıçdaroğlu about his proposal of a new military mandate to be valid only on Kobani proper, Erdoğan stated that Kılıçdaroğlu's proposal is a step towards protecting Syria's Assad regime.

"How can we applaud a regime -Syrian- that killed 250,000 of its own citizens" Erdoğan said. He added that Turkey is only country in the world that is concerned with or actually helping Kobani.

Reconciliation process is not something that can be disrupted with spoiled actions, Erdoğan said, and he will continue his struggle to bring peace and calm.

"Both the murdered and the murderers (in Kobani protests) are of Kurdish origin" Erdoğan noted.

Turkish Prime Minister Ahmet Davutoğlu: "Turkey will continue to pursue the reconciliation process with a strong will"

Turkish Prime Minister Ahmet Davutoğlu has also condemned vandalism during his speech in the eastern city of Turkey, Malatya on Friday. He said, "Regardless of the provocations done in Turkey, our brotherhood will not be damaged."

"Those traitors who insist on Turkey's connection to ISIS, I demand that you show documentations," Davutoğlu stated.

Turkey's main opposition party (CHP) leader Kemal Kılıçdaroğlu: "We all need to know that terrorism is a humanity crime"

Kılıçdaroğlu called the shooting incident in the eastern Turkish city of Bingöl which killed one police officer and left one injured on Thursday as "inconceivable". The incident had taken place while the officials were investigating property damage that had occurred in the demonstrations.

"It is without a doubt that terror has a purpose, but a good-functioning state does not allow that," Kılıçdaroğlu said.

There is no "reasonable" explanation for roaming the streets, for the 30 dead, said Turkish Parliamentary Speaker Cemil Çiçek on Friday. He said, Kobani protesters are being used.

At least 31 people have been killed since Monday in clashes involving Kurdish protesters in Turkey, over the ISIS siege of Syria's Kurdish-populated border town Kobani.

The protesters have used the pretext that the Turkish government has allegedly done nothing to halt the relentless advance of the militant group on the Syrian city.

Çiçek said, "Political channels have been opened, everyone can now freely convey their ideas in the parliament or outside it."

Despite the existence of such political means, massacre of the innocent is not acceptable, according to Çiçek.

The strings of these protests are held from out of Turkey, according to Çiçek. "We are losing our own people because of games played in others' yards."

ISIS is maybe one of the most brutal organizations ever, according to Çiçek. "There is no doubt about that. They have nothing to do with Islam, humanity, but Turkey cannot be in a careless position to see their viciousness and overlook others' doings.

Turkey does not wish to neighbour any terrorist organization, Çiçek said. "Why is Turkey being forced to choose one?" 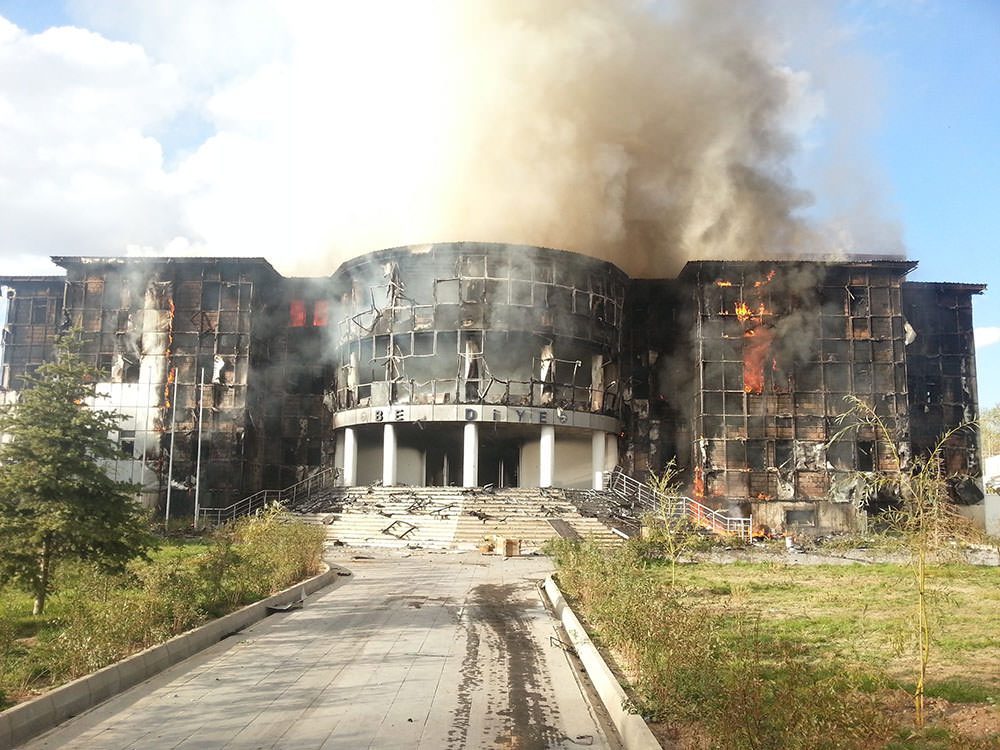 The municipality building of Patnos, located in eastern province of Ağrı, was completely burned down.

Chairmen of prominent Turkish NGO's made a joint press statement on Friday in Ankara regarding the latest violent protests based on the atrocities in Kobani that turned into vandalist actions and clashes between pro and anti PKK groups.

"Vandalism and banditry is inexcusable, cannot be accepted as legitimate and perceived as a method to claim rights," The Union of Chambers and Commodity Exchanges of Turkey (TOBB) Chairman Rıfat Hisarcıkoğlu said.

Hisarcıklıoğlu stated they condemn violent protests held with the excuse of clashes in Syrian town of Kobani and recent attacks on Turkish security forces.

He added that the lack of peace and stability would create negative results over economy and increasing investments in Eastern and Southeastern regions.

Hisarcıklıoğlu said that a dark plan is being staged to break Turkey's peace and unity, and all segments of Turkish society should act carefully and responsibly to prevent this plan.