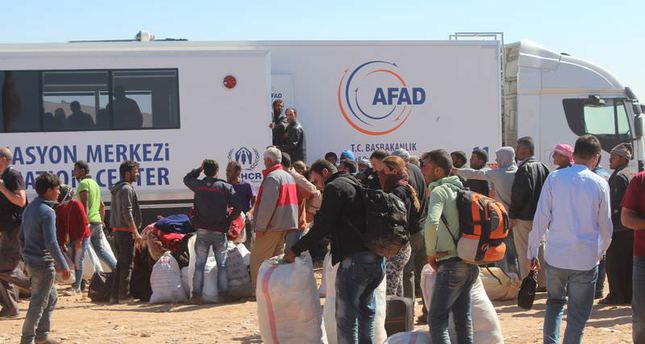 by AA Oct 10, 2014 12:00 am
The Turkish government has sent 634 vehicles of humanitarian aid to the Syrian town of Kobani since September 19, the prime ministrery said Friday.

"The total amount of aid, including food, medicine, tents, clothes and cleaning supplies delivered to Kobani region cost around $10 million," the office said in a statement.

Kobani, also known as Ayn al-Arab, has been a scene of fierce battles between the Kurdish groups and the ISIS since mid-September.

The statement said Turkey started to deliver humanitarian assistance to the war-torn Syria in August of 2012. More than 190,000 people are estimated to have been killed in the Syrian civil war.

Turkey's disaster and emergency agency, the AFAD, has been collaborating with Turkish municipalities, non-governmental organizations, and foreign aid agencies to provide humanitarian assistance to Syria since 2012.

The total aid amount sent to the country as of now stood at $300 million, the statement added.