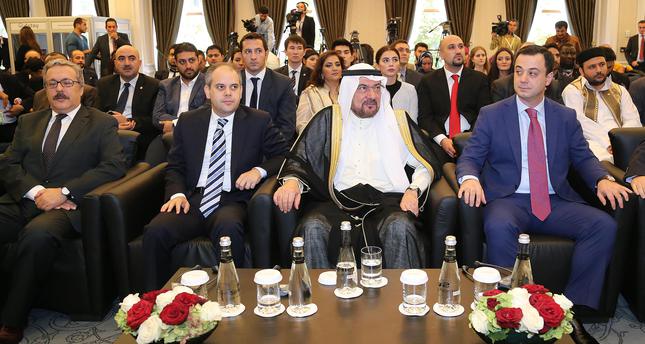 by Daily Sabah with AA Oct 11, 2014 12:00 am
A senior figure from the world's second-largest intergovernmental group after the U.N. has told an Istanbul audience that strategies are needed to challenge "so-called radical groups" misusing the name of Islam.

Elshad Iskandarov, the secretary-general of the Organization of Islamic Cooperation's youth forum, was addressing delegates at major conference for young people in Turkey's largest city.

Iskandarov noted that the progress of radical groups in the Syrian town of Kobani-kilometers from Turkey's southern border-was pressing bodies like the OIC into adopting major strategies to stop extremists converting young people to their ideologies.

"But how should we, the policy makers and experts reject this? In this particular area the four groups are: revenge seekers; adventure seekers; the self-identity seekers; and the ideology seekers."

"We should develop strategies to deny these so-called radicals," Iskandarov said.

Iskandarov called on Muslim youth to bring change to a world where "poppy groups hurt the image of Islam and misuse it."

An Iraqi delegate to the forum, Ehsan Alhakin, said that he expected Islamic countries to be part of the struggle against the ISIS militants and help the Iraqi people, "who are in the middle of the conflict."

"The support now from the Islamic world is not enough. We have 1.5 million people who are emigrating from their homes; they are living in camps. We really need support from the Islamic countries as well from the OIC and ICYF," Alhakin said.

"It's very important for us to get Turkey's support, even humanitarian support and as well as military support," he underlined.

Turkey has been pushing for the establishment of a no-fly zone and safe havens in Syria near the Turkish border. Although the Turkish parliament voted last week to approve possible Turkish military action, Ankara views these conditions as necessary before committing its forces.

Additionally, Iyad Madani, Secretary General of OIC has congratulated participants of the General Assembly on Saturday for the Declaration presented which explained the significance of the Islamic world's unity and the necessity for finding solutions for the challenges that the Islamic community faces.

Madani also emphasized on being knowledgeable of variety of cultures and identities to appreciate diversity. He has also stated that it is necessary to promote tolerance and understanding among human beings.

Under the scope of the OIC the 'Second General Assembly' of the Islamic Conference Youth Forum For Dialogue and Cooperation will last until October 11.

Young people from 45 countries will discuss denominational clashes, violence-oriented radical movements, rights of women and education in the Islamic world.

An 'Istanbul Youth Manifesto'-a type of declaration-will be published after the forum, sharing the results of discussions achieved during three days.

The OIC spans four continents, counts 57 countries as members and claims to be the voice of the "moderate and peaceful majority" of Muslims.

Turkey will chair the organization for three years following the next OIC Summit in 2016.
Last Update: Oct 12, 2014 12:13 pm
RELATED TOPICS