Death toll rises to 34 in Kobani protests in Turkey 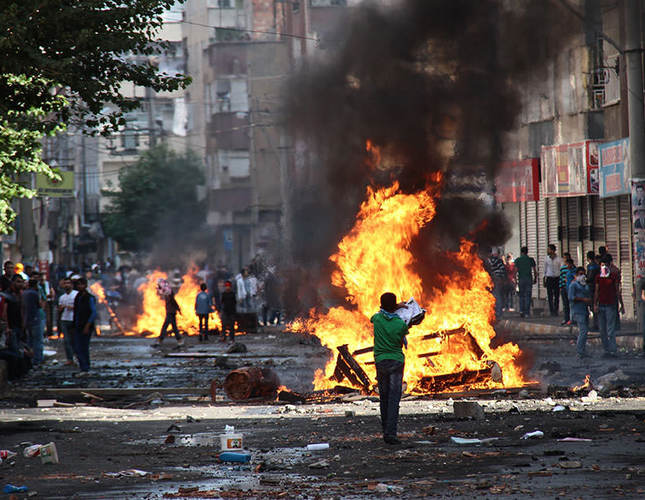 by Oct 12, 2014 12:00 am
The death toll from illegal pro-Kurdish protests and clashes between pro and anti PKK fanatic Kurdish groups in Turkey has risen to 34.
On Sunday, a man died from head injuries after clashing with police in the southeastern province of Gaziantep, hospital authorities said.
Musa Bayram, 26, was shot in the head in a random shooting Friday by unidentified assailants at Gaziantep. His body, after an autopsy, has been sent to Beytüşşebap, his hometown, in the southeastern province of Şırnak.

The protests raged mainly on Thursday and Friday in different parts of the country: 12 died in Diyarbakir, six in Mardin, five in each Siirt and Gaziantep, two in Van along with one in each of the provinces of Batman, Muş, Adana and Istanbul, respectively.

The protesters claim the Turkish government should have actively interfered to halt the advance of the self-proclaimed Islamic State of Iraq and Sham (ISIS) in the Syrian town of Kobani, also known as known Ayn al-Arab, just across the Turkish border.

Only one protester died within a clash with Turkish security forces, according to a Friday's statement by AK Party Deputy Chair and Spokesman Beşir Atalay, while most casualties occurred in clashes between supporters of the outlawed terrorist organization PKK, and a group reportedly belonging to the Free Cause Party.

The PKK is listed as a terrorist organization by Turkey as well as by the U.S. and the EU.