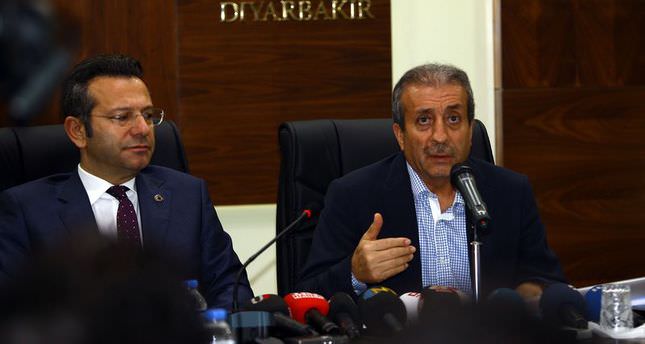 by Daily Sabah Oct 13, 2014 12:00 am
Gültan Kışanak, mayor of the southeastern Turkish province of Diyarbakır, dismissed reports that the drinking water of the province was contaminated with poison. Rumors of contamination and hospitalization of hundreds as a result gripped social media on Saturday, forcing Kışanak to make a statement earlier Sunday.

In a written statement, Kışanak said such rumors sought to spread fear and panic among the local population and warned "recent incidents" may trigger such "provocation," while saying the reports were baseless. She was referring to clashes between pro-PKK and anti-PKK rioters after supporters of the PKK took to the streets in Diyarbakır and other Turkish provinces to protest the Turkish government not allowing PKK members to cross into Syria to fight alongside with Syrian Kurdish forces.

"I call the public to rest assured [about the quality of water] and ignore the scaremongers and provocateurs. You only need to trust in our municipality and DİSKİ [water authority]," she said. Kışanak said that Diyarbakır was among the few cities where tap water is drinkable without filtration and had a fully-equipped laboratory where drinking water is analyzed daily for contamination. Diyarbakır, where the PKK draws support from the Kurdish population, has seen violent protests for days.

The province is under a cloud of unease due to riots and the curfew imposed recently was recently lifted. Police stations were attacked in central Diyarbakır though no casualties were reported and an intelligence report warned about a likely car bomb attack in the city. Diyarbakır police stepped up security measures, increasing checks on suspicious persons carrying large bags and suspicious vehicles.