Negligence over violence a possible factor in Bingöl attack 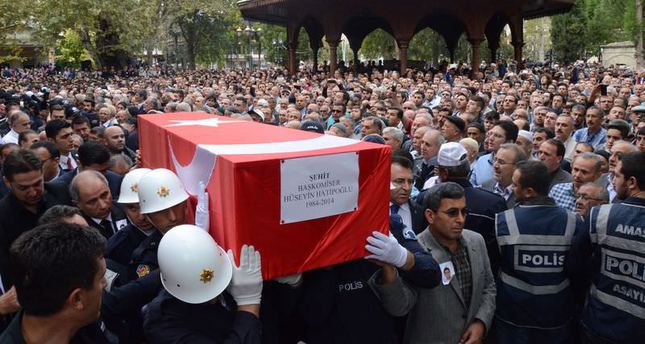 Red tape in the judicial bureaucracy might have played a role in last Thursday's attack on the director of the Turkish National Police in the eastern province of Bingöl, as new details emerged regarding the attack.

Bingöl police chief, Atalay Ürker, was badly injured and his deputy Atıf Şahin and Chief Inspector Hüseyin Hatipoğlu were killed in Thursday night's attack, as the trio was walking on the street. Three senior police officials were examining property damage in the aftermath of the violent riots that started during protests against the government's "inaction" over the plight of Syrian Kurds in Kobani. Ürker remains in intensive care at an Ankara hospital, and four suspects involved in the attack were killed in a clash with police after they fled the scene. Another suspect managed to flee. Seven others were detained on charges of acting as accomplices to the gunmen.

It was revealed that the attack in downtown Bingöl on the group of high-ranking police officers came one day after the Bingöl police force was denied wider authority for security. The police department reportedly applied to the local court to be authorized with a general search warrant that would allow police officers with authority to stop and search any suspicious person. The police cited violent riots in Bingöl and the region where supporters of the PKK took to the streets with Molotov cocktails and guns. The riots killed 34 people in a week across the country and left a countless number of buildings, including businesses, looted and damaged. The riots started as protests against attacks by Islamic State of Iraq and al-Sham (ISIS) on the Syrian Kurdish town of Kobani but evolved into clashes between pro-PKK and anti-PKK groups. The Bingöl police cited that the police in the region frequently come under fire, mentioning attacks on police officers in nearby Diyarbakır province and told the court that they had intelligence that more attacks targeting police would be carried out. The police sought to be issued a 10-day general search warrant from Oct. 9 to Oct. 19. However, the court rejected the request, ruling that "concrete evidence about possible attacks was unavailable and a wider authority for police may raise concerns in the public."

Another alleged factor that might have contributed to perpetrators of violence going unchecked concerned the gunmen involved in the attack. Ali Bozan, one of the suspects in the assassination attempt against Ürker, was killed in a clash with security forces after the incident. In August, Bozan and three others were stopped at a police checkpoint in Bingöl where police officers searching the trunk of their car found a transparent bag filled with medicines and two black bags. Police officers called the local prosecutor for a search warrant for the bags and other parts of the car, but the prosecutor refused and told the officers to let Bozan and the others go.

Ankara has vowed to bring those masterminding the attack to justice, and a nationwide manhunt was launched. Four people, including two women, were detained in the central province of Kayseri on Saturday night, while they were traveling from Kayseri to Ankara. Sources said they were detained as part of an investigation into the Bingöl attack but were released after their interrogation.