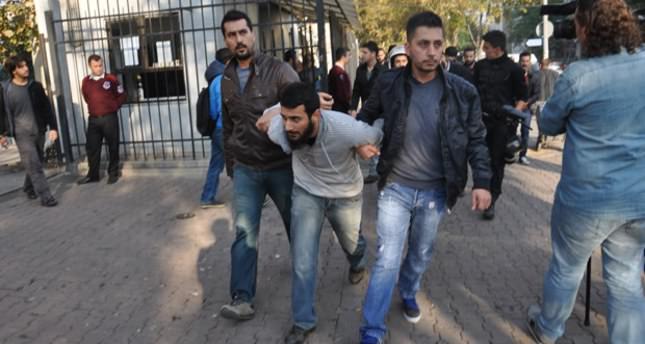 by Daily Sabah Oct 14, 2014 12:00 am
Clashes broke out between two groups of students at Istanbul University's Faculty of Science and Literature yesterday. A group of students staged a protest on the campus against attacks by the Islamic State of Iraq and al-Sham (ISIS) in the Syrian Kurdish town of Kobani. When another group of students confronted them, a clash broke out with students brandishing cleavers and sticks. Security guards intervened to stop the clash and riot police were called in. Police detained 42 students involved in the clash and tensions remain high at the university.

Students have engaged in clashes in the past weeks with groups supporting the Kobani protests confronting opposing groups and vice versa.

Kobani protests by groups linked to the PKK have often led to riots in recent days. PKK sympathizers' protests draw the ire of nationalist groups, most fervent opponents of the terrorist organization seeking Kurdish self-rule in southeastern Turkey.

Websites close to the PKK claim the Istanbul University riots were a result of attacks by "ISIS gangs" on students.