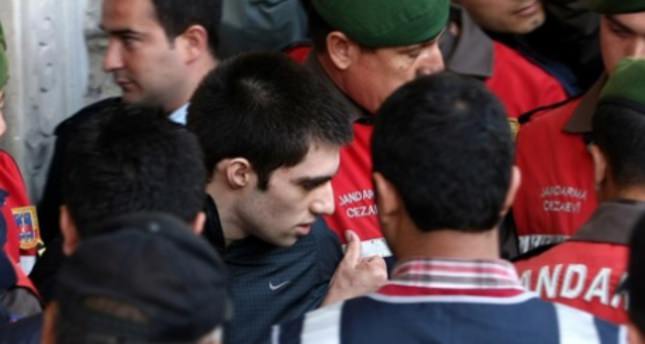 Suicide of Cem Garipoğlu, a young man convicted in the well-publicized murder of his teenage girlfriend, sparked rumors that he actually faked his death and fled prison

Cem Garipoğlu, 22, the Turkish teen convicted for the murder of his girlfriend in 2009 who was found hanged in prison on Oct. 10., continues to make headlines as speculation now surrounds his death. The unexpected death of the young man who once dominated the headlines for the grisly murder before evading authorities for months, has fuelled a number of conspiracy theories. His death was ruled as suicide but Turkish social media users and fans of urban legends were quick to dismiss it as simply a smokescreen to help the young man flee prison and the country.

Rumors aroused suspicion so much that the family of his victim have applied to a prosecutor's office to see the footage of the autopsy on Garipoğlu.

What gave rise to the rumors that the young convict is alive and abroad is the murky history of his case.

The offspring of wealthy parents, Cem Garipoğlu was leading the high life when he met Münevver Karabulut, 17, while the young girl was attending a prep school for university. Karabulut, daughter of a cook and a housewife, was living with her parents in Istanbul. On March 3, four days before her birthday, Karabulut's body, or rather what was left of it, was found in a garbage dumpster in Istanbul's upmarket Etiler district. Investigators found that she had been stabbed to death before her mutilation. Garipoğlu was the prime suspect but he went missing. For more than six months, he evaded capture. Turkish police's failure to capture the suspect, who was rumored to be hiding in Russia, sparked anger. Münevver Karabulut's parents launched a campaign to find Garipoğlu who was last seen on security camera footage while dumping the body of their daughter.

Following the disappearance of Garipoğlu, Turkish police focused the investigation on his parents and media reports claimed the family was hiding their son in an unknown location. As the police announced they were "closing in" on Garipoğlu, the young man suddenly showed up one day at a police station, some 197 days after Karabulut's body was found and turned himself in. In his interrogation, Garipoğlu confessed to killing Karabulut after he allegedly found out that Münevver was cheating on him.

His father Nida and mother Tülay Garipoğlu, as well as the family's most publicized name Hayyam Garipoğlu - the convict's uncle who was tried on several corruption cases before the murder - were detained. The mother and uncle were sentenced to three years for hiding evidence regarding the murder as they were accused of cleaning up the scene after the murder.

In 2011, Cem Garipoğlu was sentenced to 24 years for the grisly murder as he was below the legal age of 18 at the time of the murder. He was serving time in Istanbul's Silivri prison when he was found dead with a clothesline around his neck in a three-bed ward where he was staying alone. In an interview to a Turkish daily in 2012, Garipoğlu said he planned to study law after his release. "I lived in China for over one year. I plan to reside there," he said. Garipoğlu said in the same interview that he did not believe he was given "a fair trial."

"I was given the maximum sentence because of the public pressure on the court," he claimed. He has said that he did not have any psychological problems during his stay in prison.

Rezan Epözdemir, lawyer for the Karabulut family, applied to a prosecutor's office yesterday to obtain footage of the autopsy on Garipoğlu. Speaking to reporters, Epözdemir said that a series of scandals related to the trial of Garipoğlu "are now accompanied by serious allegations that this is not a suicide but rather a plot to help Garipoğlu escape from prison." He was referring to a scandal involving the Forensics Institute tasked with the autopsy of Münevver Karabulut. A sperm stain found on Karabulut's body was found to belong to another body. Forensics technicians performing the autopsy were fired for negligence for using the gloves they used on another body for Münevver's autopsy.

He stated that those led his clients to suspect the circumstances surrounding his death and have sought a confirmation. Epözdemir said he verified that Garipoğlu's death was suicide, referring to speculations that he might have been killed by other prisoners. He said he watched the footage that "clearly showed it was a suicide."