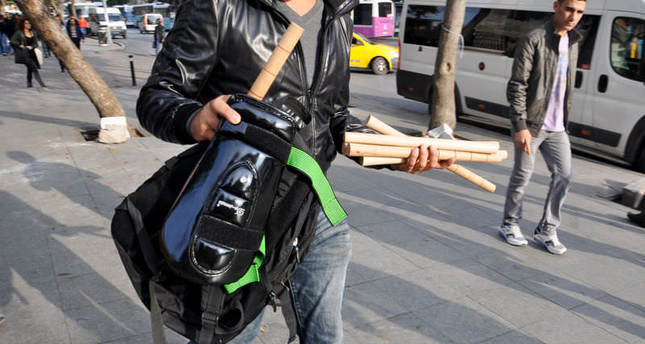 Istanbul University witnessed clashes between students supporting the terrorist organization PKK and those opposing them after the pro-PKK group staged a protest against the takeover of the Syrian Kurdish town of Kobani by the Islamic State of Iraq and al-Sham.

A well-established institution, the university was home to clashes between left-wing and right-wing students in the 60s and 70s during a turbulent period in Turkey that saw two major military coups. Nowadays, the university is hitting the headlines for renewed clashes, this time between PKK supporters and the ultranationalist crowd, one of the harshest opponents of the terrorist organization that exploits Kurdish nationalism.

In September, two groups confronted each other at the university's Department of Science and Literature as the pro-PKK group were staging a protest against the Turkish government for "not helping Kobani," the Syrian Kurdish town surrounded by ISIS, clashing with Kurdish militants including those from PKK. The clash was broken up by by police and the groups were dispersed but tensions remained high among the two groups attending classes in the same campus.

On Monday, another clash broke out. The police intervened again and detained 42 students involved in clashes in the courtyard of the university. The police made a chilling discovery at the scene: meat cleavers, apparently weilded by students from both groups. No one was seriously injured in the clash but the finding shows future clashes may be lethal.

Ultranationalists, who shout "Allahu Akbar" (God is great), the most exploited motto in the Muslim world, like ISIS militants, have been shouting the phrase during and before their attacks as some sort of war chant, leading to confusion in the media. Turkish media outlets critical of the government were quick to affiliate them with ISIS. They added the clash to the list of worrying signs of ISIS's growing presence in Turkey, though this dubious list consists mostly of anti-ISIS paranoia prevalent among critics of the Turkish government who accuse it of helping the militant group. Sightings of ISIS logos – which is a slightly changed replica of a well-known sign Muslims in Arab countries commonly use – on T-shirts, gift shops and stickers on cars have prompted fears among the public amid the group's threats towards Turkey. On the other hand, authorities dismiss the notion of broad ISIS support in Turkey and have assured that security forces remains vigilante against any terror plots. Pro-ISIS groups at universities, and other incidents such as a "picnic" where members of an association describing itself as Islamic pledged allegiance to ISIS, are widely regarded as attempts to provoke violence against ISIS to justify a counterattack.