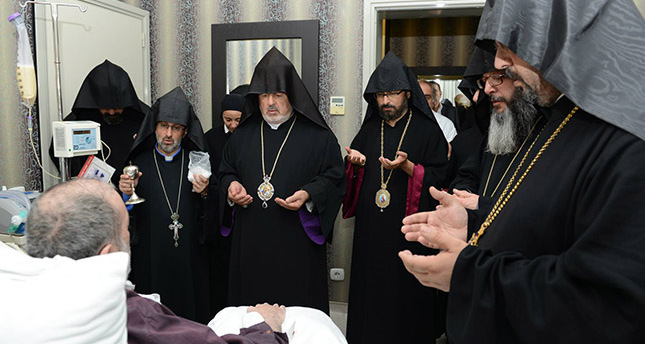 by Zeynel Yaman Oct 15, 2014 12:00 am
Prayers continue to pour in for the recovery of Archbishop Mesrob II Matufyan, the Armenian Orthodox patriarch in Turkey, who has undergone treatment for dementia since 2008.

The patriarch, also known as Mesrob Mutafyan, was photographed for the first time in six years at the hospital where he is being treated for dementia. The photo shows the patriarch in his hospital bed surrounded by Armenian Orthodox bishops and Aram Ateşyan, the vice-patriarch who represents the patriarchate in the absence of Mutafyan, solemnly praying for the ailing religious leader.

Mesrob II was diagnosed with dementia in 2008 and is confined to a Turkish-Armenian hospital in Istanbul where he has been treated since.

He is the 84th patriarch of Turkey's Armenian Orthodox community and succeeded Karekin II in 1998. Archbishop Aram Ateşyan was appointed to serve as Patriarchal Vicar, as Mesrob II had to withdraw from the duties of the patriarchate due to his illness. Under Turkish laws and patriarchate rules, a new patriarch cannot be elected while his predecessor is alive. The Istanbul-born patriarch studied sociology and philosophy in the U.S. before returning to Turkey. He was ordained by the priesthood in 1979 and appointed as pastor to Kınalıada, an island near Istanbul where a small Armenian community lives.