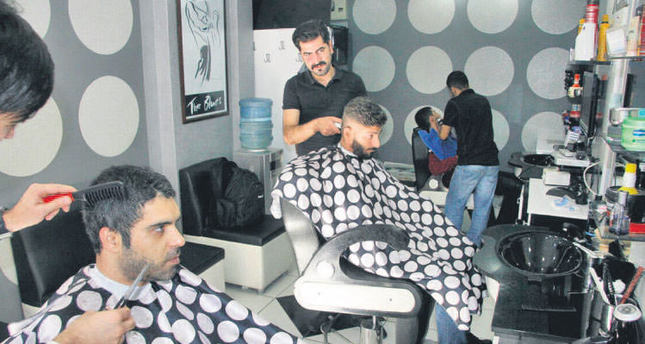 by Oct 15, 2014 12:00 am
It is hard to grow a beard in the southeast of Turkey nowadays without being branded a supporter of the Islamic State of Iraq and al-Sham (ISIS), or worse, a member of the militant group.

Increasing and indiscriminate attacks by sympathizers of the terrorist organization PKK against people with beards has led to a boom in the business for barbers in the southeastern Turkish province of Diyarbakır.

In the face of a mindset branding anyone with a long beard as ISIS militants, men have flocked to barbershops to get rid of their facial hair. Barbers say they shave at least 15 people a day who are afraid of being stigmatized as ISIS or a Turkish Hizbullah member.

İsmail Kazak, who runs a barbershop in the province's Sur district, said demand for a beard shave was high "though it has only been days after eid," referring to a Muslim festival where men traditionally clean up and shave their beards. "Some people who had nothing to do with ISIS or Hizbullah were victims in recent incidents," Kazak told İHA. "People are anxious, just like they were in the 1990s," he said. That decade saw people killed for allegedly being a member of the PKK or Hizbullah, a terrorist organization reportedly established by Turkey's "deep state" to counter the PKK threat, based only on their appearances, acquaintances and relatives. "They have their beards shaved entirely or trimmed so that they would not suffer," Kazak says.

"I have been doing this job for 15 years and it is the first time I shaved so many beards in such a short period of time," Yakup Bahadır, another barber, says.

Twelve people have been killed and 47 others injured in riots in Diyarbakır. Riots left many public buildings, including schools and banks, damaged.

ISIS's attacks on Kobani, a Syrian Kurdish town near the Syrian-Turkish border, drew international attention to the situation of Kurds there. Hundreds of thousands of people fled to Turkey from Kobani as ISIS advanced.

The terrorist organization PKK, an affiliate of armed Kurdish groups fighting ISIS in Kobani, stepped up to the plate, in a way, exploiting the situation. Militants, long at odds with so-called radical Islamist groups in Turkey, took it upon to themselves to wipe them out. What started as a protest against the government's "inaction" in the face of the plight of Kurds in Kobani, has now evolved into the PKK's personal fight against those groups. The Free Cause Party (HÜDA-PAR), an opposition party the PKK accuse of having ties both with ISIS and the now-defunct Turkish Hizbullah, was the primary target in riots. Most among 34 casualties were people supporting HÜDA-PAR or those with the slightest connection to the party. Indiscriminate killings gripped particularly southeastern Turkey where a predominantly Kurdish population lives. A Saudi and a Syrian worker were among those killed by PKK supporters who reportedly attacked them after seeing their beards trimmed in the fashion of ISIS militants and apparently because the man did not speak Kurdish. Anti-ISIS sentiment, or rather ignorance, was so rampant, a mentally disabled young man was stabbed in the province of Batman as he was heading to a mosque just because he had a long beard.