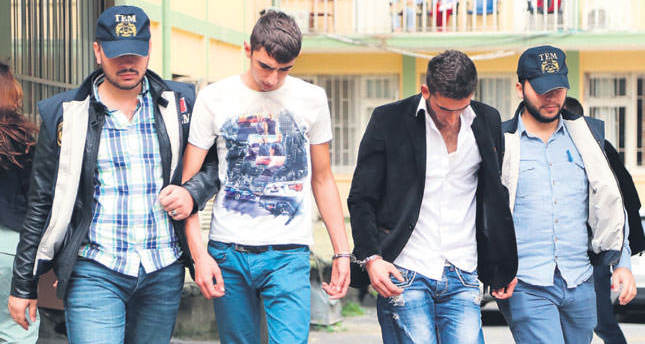 by Daily Sabah Oct 15, 2014 12:00 am
Turkish police in Istanbul detained 348 people in raids after week-long riots by sympathizers of the PKK under the pretext of protesting the attacks on Syria's Kobani - also known as Ayn al-Arab - and government inaction against the Islamic State of Iraq and al-Sham (ISIS).

"Children," in which the police are referring, are individuals below the legal age of 18, often employed in street riots by the terrorist organization.

The police also found three shotguns and three homemade explosive devices in raids at several locations in Istanbul. Riots, which began as protests, caused one death in Istanbul and 33 in other cities, and was marked with widespread vandalism as rioters torched and looted supermarkets, schools, clinics and other public buildings.

Istanbul police announced that 10 were arrested among the 348 detainees while the others were released. Apart from guns and explosives, Turkish police confiscated 111 Molotov cocktails, devices to fire projectiles such as fireworks, two pistols, masks commonly worn by rioters, knives and materials used in building explosive devices such as gas cylinders as well as gallons of gasoline used in making of Molotov cocktails.

Children are at the forefront of riots the PKK and its affiliates incite in Turkey either to protest ISIS or what they called the lack of progress in the Turkish government's reconciliation process with the Kurdish community. The terrorist organization often turns to children or rather those below the legal age as they can get away with a lighter sentence even if they are detained on charges of vandalism. The PKK has came under fire recently for persuading children as young as 13 to join the militants. Parents of children have been staging a sit-in in the southeastern Turkish province of Diyarbakır to protest the recruitment of child militants.

In a related development, footage surfaced yesterday regarding the riots in Istanbul's Esenyurt district, leading to a new police investigation. The footage shows a middle-aged man approaching a group of children who joined the riots. The man hands an unknown amount of money to one of the children and speaks to four others. The police are now looking into matter of whether the man might have hired children to join the riots.

Over 1,000 people were detained following nationwide street violence and 58 people were arrested in connection with Kobani riots.