Majority of Turks in favor of smoking ban extension 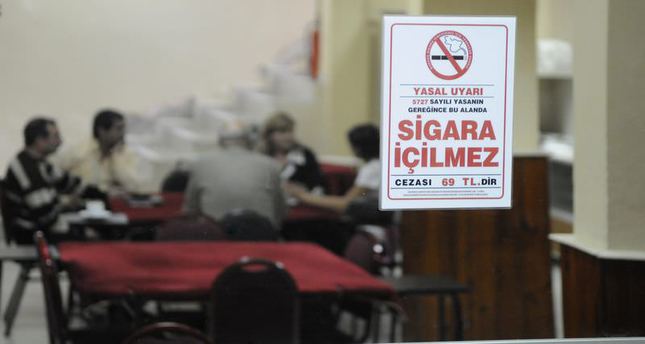 New legislation to cut smoking will see parks, mosques and hospital environs become smoke-free in 2015, but some people are still holding out against efforts to kick the habit

Smokers in Turkey will soon find themselves unable to light a cigarette outdoors after a new regulation on tobacco takes effect at the end of this year.

The ban will include parks, mosque yards, shopping mall entrances and hospital gardens – all places where many smokers still congregate.

Cafes and restaurants will also be affected as some premises' outdoor areas will fall under the legislation. Instead, smoking areas will be designated for those wishing to indulge the habit.

Turkey is among international peers when it comes to tobacco control. A similar ban is being proposed for both Trafalgar and Parliament squares plus parks in the U.K. capital, according to a report released by London's Health Commission this week.

The majority of Turks – both smokers and non-smokers – which Anadolu Agency spoke to were glad of the plan.

"I completely support the planned regulation. I even support tobacco companies being shut down; I say this as someone who has been smoking for 15 years," said 46-year-old Nejat Kesen, smoking outside a cafe in Istanbul's Beyazit district.

Kesen – who runs a textile company in eastern Turkey and often travels to Istanbul – claims that the regulation would protect the health of non-smokers.

"I am even against those who are smoking while walking because when a person smokes, the cloud goes to the person directly behind him or her, which is very disturbing," says Selahattin Akdag, 65, who quit smoking seven years ago after a four-decade habit.

"Smoking was the biggest fault in my life. I feel myself healthier now," he added.

The first tobacco control law in Turkey came into force in 1996, covering public buildings with more than four workers, as well as planes and public buses.

In 2008, another tobacco control law was passed banning smoking in closed areas like workplaces and all forms of public transport including trains, taxis and ferries.

The ban was expanded to indoor areas of bars, restaurants and cafes in July 2009.

Turks consumed 16.2 billion fewer cigarettes since the ban on smoking in enclosed areas was introduced in 2008, according to data from the Tobacco and Alcohol Market Regulatory Authority.

TAPDK figures reveal that the number of cigarettes consumed in Turkey dropped from 107.8 billion in 2008 to 91.7 billion units in 2013 – amounting to a decline of 16.1 billion fewer cigarettes, a 15 percent decrease in consumption.

Nevertheless, some heavy smokers think an open-air smoking ban is too much.

"It is nonsense. I don't believe my smoke disturbs another person in the open air," says 48-year-old Zekiye Ozin, a hospital janitor smoking a cigarette in the garden of a hospital in the Haseki district.

She has been smoking one pack in a day for 35 years and says she cannot quit.

According to the World Health Organization, nearly six million people die from tobacco-related illness each year. Unless urgent action is taken, the annual death toll could rise to more than eight million by 2030.

"I can smoke in Turkey freely now but the new regulation would not be good for me personally," says 49-year-old Korean interpreter Patrick Jinock, who has been in Turkey for over one year.

He has been smoking for 20 years and says he does not plan to give up.

However, non-smokers are complaining about outdoor smoking.

"I ask smokers not to smoke by my side. Some tell me: 'It is none of your business.' But here is an open area," says Irfan Magus, 60, a mosque janitor in Haseki.

"Some of them even smoke in toilets. They don't listen to me when I warn them," he adds, angrily.

Pointing to some nearby benches in a park in Findikzade, Sevim Gulay, a mother of a 2-year-old boy says: "Fathers and mothers are smoking there while waiting for their children. They harm them. I think the new ban will be beneficial for everyone."

Ihsan Karaman, president of the Turkish Green Crescent Society, underlined the importance of extending the ban, especially to parks and hospital gardens.

"People go to hospital to recover but they lose their health when they first encounter a big cloud of smoke at the entrance," he said.

"Children are especially affected by smoking. Relatives should be careful about protecting their children from smoking."

Karaman said these kinds of regulations did not limit people's freedom as some claim: "On the contrary, [these] regulations give people the right to be healthy."

According to the Ministry of Labor and Social Security, tobacco-related diseases cost the national economy seven billion Turkish lira ($3.88 billion) in 2012.