New presidential palace to be opened on Republic Day 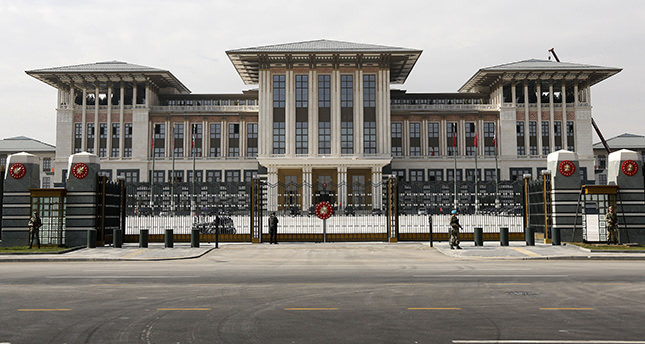 by Daily Sabah Oct 16, 2014 12:00 am
The Turkish presidency will be moved for the first time from Ankara's central Çankaya district later this month. The new presidential palace, tentatively dubbed "AK Saray" (White Palace), is set to be inaugurated at a reception that will be held on the occasion of Republic Day on Oct. 29.

The guest list for the reception was confirmed earlier in media reports with the reception being held in the new complex in Beştepe, located in a vast farm in western Ankara, which was the private farm of Turkey's founder Mustafa Kemal Atatürk before he donated it to the state in 1937.

President Recep Tayyip Erdoğan, who will move from the Çankaya Palace to the new presidential compound, visited the site yesterday.

Sprawling over an area of 300,000 square meters, the compound includes one main building, another building for meeting with visiting heads of state and dignitaries, guesthouses, gardens, a park and a congress center.

The design of one of the offices for the president inside the complex is said to be based on the White House's Oval Office, according to Turkish media. The office was insulated against wiretapping and has no electric outlets, to prevent the planting of bugs. Its modest design was inspired by Seljuk architecture.