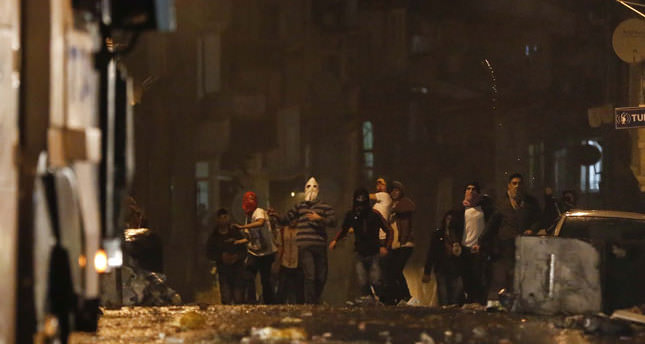 An Istanbul resident who was injured in the middle of pro-PKK riots last week succumbed to his wounds, bringing the nationwide death toll from the riots to 35

Serdar Aslan, 32, a father of two, was heading home after closing his hairdressing shop in Istanbul's Sultanbeyli district on Oct. 7. His shop was located on a street where a group of PKK supporters were staging riots. Aslan, reportedly a nationalist activist, confronted the crowd clashing with police and vandalizing shops in the area. One of the rioters hurled a pavement stone he removed from the street at Aslan. He was hit on the head and critically injured. He was hospitalized for one week and died at the hospital in the intensive care unit in Istanbul's Pendik district. His body will be sent to his hometown of Trabzon in northern Turkey for burial.

His death brought the death toll from the protests in support of Kobani to 35. Last week, many cities in Turkey were gripped by riots incited by pro-PKK groups. Under the guise of protesting the Turkish government's inaction over attacks by the Islamic State of Iraq and al-Sham (ISIS) in the Syrian Kurdish town of Kobani located near the Syrian-Turkish border, the groups took to the streets in Istanbul and other cities. Armed with rifles, pistols, Molotov cocktails and knives, they targeted people they viewed as enemies of the PKK, namely nationalists and Muslim groups they accused of being affiliated with ISIS.

Aslan was the second casualty from Istanbul street violence. Mert Değirmenci, a 19-year-old rioter, was killed when unknown gunmen opened fire on a pro-PKK group in Esenyurt, a district on Istanbul's European side, on Oct. 7.

Sultanbeyli, where Aslan lived and worked, is a working-class district on Istanbul's Asian side. It has a mixed population of migrants from Turkey's Black Sea region and Kurds from the southeast. The district has a largely conservative population as well as strong support for nationalists, although pro-PKK groups have also seen a rise in popularity in recent years.

The PKK often exploits teenagers and unemployed youth in Istanbul's working-class districts and neighborhoods such as Sultanbeyli, Okmeydanı on the European side and other areas. Police in Istanbul detained 348 people in raids after week-long riots in the city, including 102 minors - individuals below the legal age of 18 who are usually released or handed down lighter sentences if they are charged with involvement in riots.