Ebola scare in Istanbul turns out to be malaria 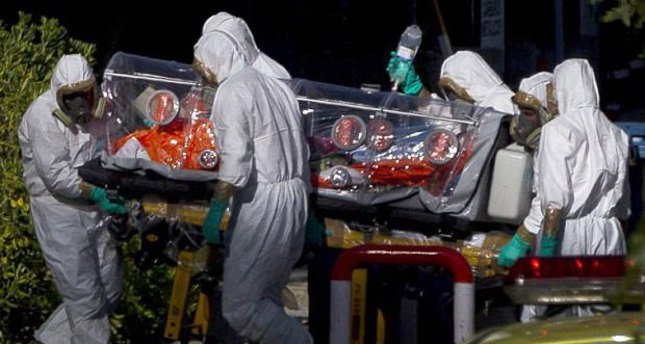 by Daily Sabah Oct 17, 2014 12:00 am
Turkish authorities announce that a woman hospitalized for a suspected Ebola case was diagnosed with malaria.

An unidentified 21-year-old woman from the Ivory Coast suffering from a high fever, vomiting and stomachaches was admitted to Marmara Research and Training Hospital in Pendik, a district on Istanbul's Asian side, on Wednesday. Since symptoms were similar to those of Ebola, the deadly virus gripping West Africa, hospital officials shut down the emergency services of the hospital where she was admitted as a precaution against an Ebola outbreak. The initial diagnosis found that the woman, who arrived in Istanbul from the Ivory Coast 20 days ago, actually had malaria. The woman was transferred to a better-equipped hospital on Istanbul's European side for further examination while emergency services at the hospital were reopened.

The Istanbul Governorate said in a written statement that the woman was admitted to hospital around 5:00 p.m. on Wednesday. "Since the patient was from a West African country [where Ebola infection rates are high] and had similar symptoms to Ebola, authorities treated her as a potential Ebola patient and took all measures. She was later diagnosed with malaria and is currently being treated," the statement said.

The Ebola outbreak has killed more than 4,000 people in Africa, mostly in Guinea, Sierra Leone and Liberia. The World Health Organization (WHO) branded the outbreak as "the most severe acute public health emergency of modern times." Apart from Africa, Ebola cases have been reported in the U.S., Spain and Germany, prompting countries including the U.S., Canada, U.K. and France to introduce screening for suspected Ebola cases at airports for travelers coming from African countries affected by the lethal virus.

Turkey took a series of security measures including deploying Ministry of Health personnel to airports to screen passengers suspected of having Ebola. Hospitals across the country are being equipped with quarantine units and medical personnel are being trained to handle Ebola cases. The Minister of Health Mehmet Müezzinoğlu assured the public that Ebola is not an imminent threat to Turkey and all four suspected Ebola cases turned out to be malaria. He urged people not to panic and said the ministry had all measures in place in case of an Ebola infection. "We check people with illnesses against Ebola and hospitalize people under risk as soon as their planes land in Turkey. Such was the case for four patients, but they were all diagnosed with malaria," he said the previous day. Turkey, a primary transit hub for passengers from Africa arriving for connecting flights, also receives a huge number of immigrants from African countries.