Ebola scare in Istanbul turns out to be false alarm 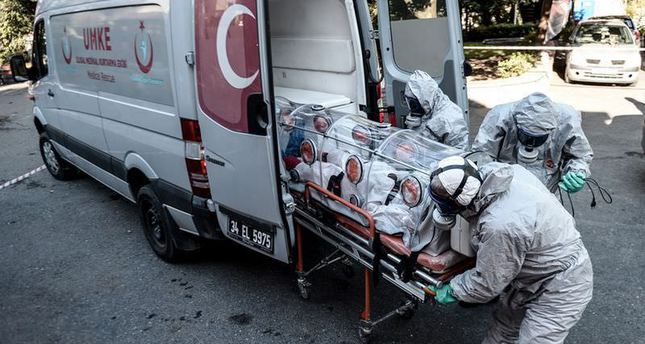 by Daily Sabah Oct 18, 2014 12:00 am
The patient, who was hospitalized at Haydarpaşa Numune Teaching and Research Hospital in Istanbul on Saturday evening after showing symptoms of Ebola virus, was not suffering from the disease, sources said.

After the patient was brought to the hospital on Saturday, hospital officials immediately shut down emergency services of the hospital, patients staying in the hospital were transferred to other hospitals and the relatives of the patients were given protective masks and distanced away from the hospital.
Earlier this week, another patient from the Ivory Coast also was hospitalized for suspected Ebola virus in Marmara Research and Training Hospital in Pendik, a district on Istanbul's Asian side on Wednesday. Turkish authorities announced that the patient was diagnosed with malaria.

The Ebola outbreak has killed more than 4,000 people in Africa, mostly in Guinea, Sierra Leone and Liberia. The World Health Organization (WHO) branded the outbreak as "the most severe acute public health emergency of modern times." Apart from Africa, Ebola cases have been reported in the U.S., Spain and Germany, prompting countries including the U.S., Canada, U.K. and France to introduce screening for suspected Ebola cases at airports for travelers coming from African countries affected by the lethal virus.

Turkey took a series of security measures including deploying Ministry of Health personnel to airports to screen passengers suspected of having Ebola. Hospitals across the country are being equipped with quarantine units and medical personnel are being trained to handle Ebola cases. The Minister of Health Mehmet Müezzinoğlu assured the public that Ebola is not an imminent threat to Turkey and all four suspected Ebola cases turned out to be malaria.