Reporters meet to turn a new page on Turkish-Armenian relations 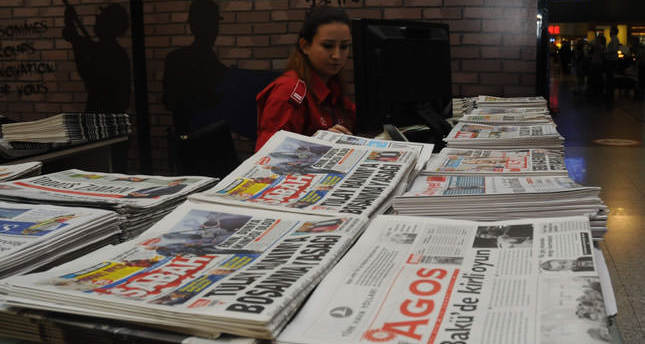 by AA Oct 18, 2014 12:00 am
A new engagement program brought together 18 journalists and bloggers, 10 from Armenia and eight from Turkey, to spend a fortnight travelling around Turkey and Armenia, two countries that share a divided and troubled past.

Vazgen Karapetyan, 44, studied medicine but never practiced, claiming it was difficult to find a job in Armenia just after its independence from the Soviet Union in 1991. He is the deputy director of the Yerevan-based Eurasia Partnership Foundation, a mainly U.S. and EU-backed institution. "If, fifteen years ago, someone had told me that I would be working on Armenia-Turkey relations, I would have said: 'No, you are joking'," Karapetyan says.

The tour claims that it will provide an opportunity for participants to explore the neighboring country while rediscovering their own nation.

Relations between Ankara and Yerevan have historically been poor owing to bitter disagreements over events in 1915 which the Armenian diaspora and government describe as "genocide," fuelling demands for compensation.

Turkey says that, although Armenians died during deportations in 1915, many Turks also lost their lives in attacks carried out by Armenian gangs in Anatolia.

As diplomatic ties between Ankara and Yerevan stall, engagement between the two countries is now mainly through non-governmental groups and civil society.

Karapetyan's family is originally from Turkey's eastern city of Van which was once an important center of Armenian culture.

When Karapetyan had a chance to visit Istanbul for the first time in 2004, he didn't want it "because I was prejudiced about Turks and Turkey."

"I said I would never visit eastern Turkey, historical Armenian land, because it is painful," he adds.

Speaking in Turkey's Aegean province of Izmir he says: "I couldn't imagine even talking with a Turkish person because Turks were our enemies. When I started to communicate with Turkish intellectuals, I saw that it wasn't true."

Karapetyan has since been working on normalization projects, first between Armenia, Azerbaijan and Georgia and then Armenia and Turkey, that bring together civil society and non-governmental organizations.

He recalls his first visit to Van in eastern Turkey where his grandfather was born.

"It was OK," he says, reflectively. "I wouldn't say it was painful, no.

"My grandfather, who died in 1994, had always dreamed about going back to his hometown, to see the Armenian Cathedral of the Holy Cross on Akdamar Island in Lake Van. It was gorgeous. It was also reconstructed under the current [Turkish] administration."

According to Karapetyan, Armenia was a closed society during the Soviet era and the 1915 events were not openly discussed as a result of Russian central government policies until 1965 when Moscow permitted the building of a memorial in Yerevan.

Turkish-Armenian relations also mean Armenian-Azerbaijan relations as Turkey closed its border in 1993 to protest Yerevan's occupation of Nagorno-Karabakh, a disputed territory between Armenia and Azerbaijan.

"When the Turkish government decided to close the border, it was perceived in Armenia as a hostile step. It increased the notion that Azerbaijanis and Turks are the same and they are against Armenia," says Karapetyan.

Turkey's foreign ministry says Ankara was one of the first to recognize the independence of Armenia in 1991 and "actively supported the country's integration with regional and Euro-Atlantic organizations."

"It is not only an Azerbaijan-Armenia problem, there is also Russia," says Mensur Akgün, a professor from Istanbul Kültür University, who adds that today Moscow almost wholly controls Armenia's security, for example at airports.

Pointing out that Armenia agreed to become part of a Russia-led custom union on October 10, Akgün foresees that Moscow's influence in the Caucasus country will increase.

The Russia-led Eurasian Economic Union will come into force on Jan. 1, 2015 and it is seen as an alternative to the EU for Russia and former Soviet countries.

One of the Armenian participants in the project is Gayane Arustamyan, a 44-year-old freelance journalist who was born in Nagorno-Karabakh says, "The new custom union limits the independence of Armenia."

Arustamyan points to Russian influence on Armenia-Turkey relations: "The question of influence on the Caucasus becomes an issue for Russia," she says.

"Armenia is on the verge of losing its independence. It depends on Russia. In Armenia people are demanding a halt to this process. The opposition doesn't want to be part of a custom union.

"I am one of those people who are against it. Because it doesn't matter how small your country is you should govern yourself," she adds.

In May this year, Turkey' current prime minister, then-foreign minister, penned an article for British newspaper The Guardian. Ahmet Davutoğlu recalled a protocol signed in Zurich on Oct. 10, 2009 - derailed at the last moment - which would have normalized relations between Turkey and Armenia.

Davutoğlu wrote: "I believe we now have the opportunity to recapture the engagement and reconciliation that eluded us in 2009."

"What we share is a 'common pain' inherited from our grandparents," he added.

Another traveller is Meri Musinyan, 37, from Yerevan who works for state-owned Public Radio of Armenia.

According to Musinyan, who visited Turkey for the first time last October, ordinary people living in the two countries have a huge role to play in normalizing relations.

"This kind of visits are very important because governments make their politics but the ordinary people should talk to each other," she says.

"I have met a lot of people who are open-minded and very open to discussing things which were dangerous to discuss before" she explained, adding that she was not aware that in Turkey the new generation and intellectuals were more ready to discuss the 1915 events.