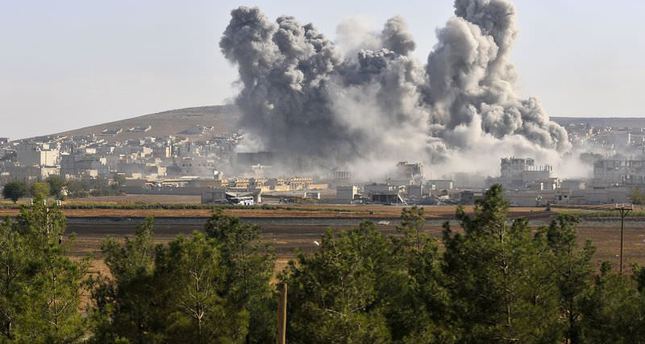 by AA Oct 18, 2014 12:00 am
At least seven mortar shells landed in Turkey's southern Sanliurfa province Saturday during an intense battle between two militant groups in the Syrian town of Kobani.

According to an Anadolu Agency correspondent near the Turkish-Syrian border, the shells landed inside the Turkish territory when the battle for Kobani waged on between the Kurdish Democratic Union Party, or the PYD, and the ISIS.

The explosions from the shells were heard in Sanliurfa's Suruc district.

The U.S.-led coalition forces also continued to carry out airstrikes on the ISIS targets in Kobani.

More than 180,000 Syrian Kurd refugees from Kobani have crossed into Turkey since Ankara opened its border crossing on September 19 after the ISIS militants besieged the Syrian town.

The Iraqi army has been engaged in battles with ISIS militants since the extremist group took control of Mosul, Iraq's second largest city, in mid-June, in addition to other large swathes of the country.