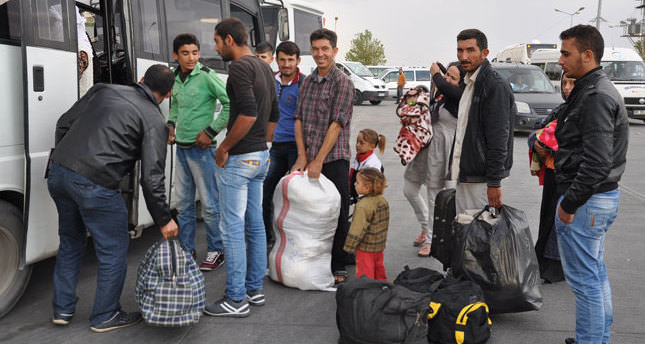 Turkey is helping those displaced by ISIS attacks on the Syrian Kurdish town of Kobani to travel to northern Iraq from Turkey where they first took shelter, easing the refugee burden on the country already embattled by the flow of over 1.5 million Syrians

Turkey, which has received about 180,000 people from Kobani since Sept. 19, now sees a reverse influx of the displaced. Syrian Kurds coming from the town in Turkey have started departing for Northern Iraq where a semi-autonomous Kurdish region is located.

Those who took refuge in Suruç, a Turkish border town situated opposite Kobani, travel to Silopi, a small Turkish town on the Turkish-Iraqi border where they have crossed into Northern Iraq. The local municipality has provided buses for Kobani residents to the border crossing.

Speaking to İhlas News Agency, Nishtevan Husem, a Kobani resident, says ISIS attacks forced them to leave Kobani and he lost many relatives in the fight against the militant group. "It was dangerous to stay in Kobani, so we went to Suruç. Now we will go to Iraq because I have more people I know there than I have in Turkey," Husem said.

Nazam Servan, another Kobani resident, said they would stay with relatives in Northern Iraq. Muhammad Ahmet, traveling to Iraq with his family, said, they would return to Kobani once the clashes between ISIS and Kurdish militant groups were over.

Turkey hosts those fleeing Kobani in tent camps and other facilities in Suruç. A new tent camp with a capacity of 20,000 people will be set up in the Turkish border town. Officials say the camp will be finished within two months and those who had to live outdoors will be accommodated in the camp.

According to AFAD figures, Turkey hosts 1,575,272 Syrians and about 220,000 of them stay in tent camps and accommodation facilities in Turkish provinces near the Syrian border.

The sudden influx of the displaced from Kobani has raised concerns in Turkey about the country's capability to handle the refugee crisis but authorities have assured the public that resources are in place to help the displaced though they prioritize helping the displaced in their home country. It is difficult to set up camps or deliver humanitarian aid to the internally displaced in their own country due to the ongoing conflict. Still, Turkey managed to start the construction of a tent camp for Yazidis in Northern Iraq who fled that country's Mosul which was taken over by ISIS.