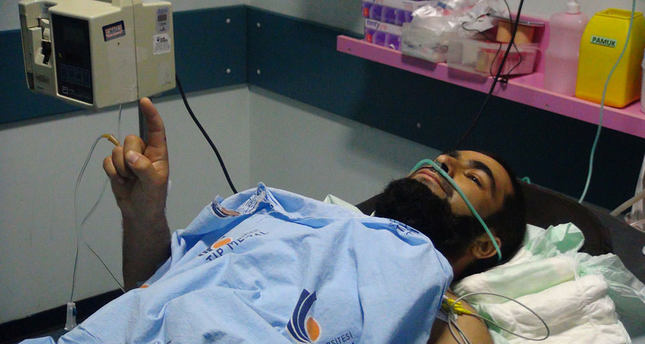 by Daily Sabah with AA Oct 20, 2014 12:00 am
The death toll from illegal pro-Kurdish protests and clashes between pro and anti-PKK fanatic Kurdish groups in Turkey has risen to 36.

The protesters claim the Turkish government should have actively interfered to halt the advance of the self-proclaimed Islamic State of Iraq and Sham (ISIS) in the Syrian town of Kobani, also known as known Ayn al-Arab, just across the Turkish border. ISIS's advance in Kobani added almost 200,000 new refugees to Turkey's nearly 2 million Syrian refugees.

Only one protester died in a clash with Turkish security forces, while most casualties occurred in clashes between supporters of the outlawed terrorist organization PKK, and people reportedly linked with the Islamist pro-Kurdish Free Cause Party (HÜDA Par).

Scores of vehicles, state buildings, party offices and shops were set on fire and damaged during the violent protests.

Speaking at a meeting held with the Wisemen Committee – tasked with promoting the reconciliation process and explaining it to the public – on Sunday, Prime Minister Ahmet Davutoğlu stated that violent protests aimed at undermining and shattering the positive mentality in the region enabled by the ongoing reconciliation process that aims to end the decades-long conflict with the PKK.

Turkish officials have said the country is against supporting PYD fighters in Kobani with military and financial aid, even if Turkey sends troops to take part in the fight against ISIS.

The PYD is the Syrian offshoot of the outlawed PKK, which is listed as a terrorist organization by Turkey as well as by the U.S. and EU.