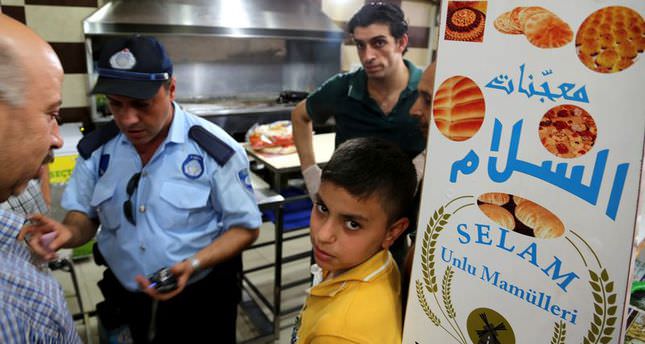 With no end in sight in the conflict at home, Syrians who took shelter in Turkey settle down by establishing businesses in their new home

Facing an unknown fate, displaced Syrians living outside the refugees camps where they are hosted by Turkey, turn to make a living by setting up shops across the country.

Data provided by the Prime Ministry's Disaster and Emergency Management Authority (AFAD) that oversees the needs of the displaced, indicate Syrians set up 1,898 businesses in Turkey since they first started arriving in Turkey en masse when the conflict broke out in Syria four years ago.
Out of the 1,898 businesses, only 370 are unregistered under the code of commerce, according to AFAD figures. Syrians opened businesses in 14 cities and Istanbul, the country's most popular city for immigrants, dominates the list of most businesses set up by Syrians with 809. It is followed by Hatay, a southern Turkish city situated on the Turkish-Syrian border that also has a considerable number of displaced Syrians living in refugee camps or in private residences. Gaziantep, Şanlıurfa and Kilis, other cities located on the 915-kilometers-long border follow Hatay. Curiously, Syrian nationals did not set up any businesses in the Turkish capital of Ankara.

AFAD also announced the current number of displaced Syrians in Turkey. Şanlıurfa, which saw a renewed influx of Syrians since September, has the highest number of Syrians with 410,055. Şanlıurfa's town of Suruç received nearly 180,000 Syrian Kurds who fled Kobani, located across the border from Suruç, after the Islamic State of Iraq and al-Sham (ISIS) launched a major offensive against Kurdish forces in the predominantly Kurdish Syrian town. Gaziantep follows Şanlıurfa with 265,987 Syrian refugees while Hatay has 197,952. The least number of refugees is in Turkey's popular vacation spot of Antalya in the south with 2,771 people.

Turkey is host to about 1.6 million Syrians and the majority of them live outside refugee camps, eking out a living by running shops if they have the means or panhandling on the streets if they are impoverished. About 220,000 people stay in tent refugee camps and "container cities" – camps composed of shipping containers converted into housing units – in 10 cities.

The country received 545,088 Syrians who have fled the conflict so far, but 324,000 have returned home to live in relatively safe areas held by rebels.

Speaking to Anadolu Agency, AFAD President Fuat Oktay, said Turkey was the only country providing unprecedented aid to the displaced Syrians it hosts. "All state agencies, institutions, et cetera have been successful in catering to all needs of Syrians. Our country, our nation does not have to be modest on that matter. It is clear that Turkey is better in aiding Syrians than others. AFAD has been on the border to help Syrians since people started fleeing. We provide every kind of humanitarian aid. No country is as embracing of Syrians as Turkey," he said.

Oktay added that there were "people who merely talk about the plight of Syrians" and "people actually helping them." "We are the ones helping them and proud of it. This is a humanitarian issue and Turkey never discriminates against those seeking shelter here no matter what their religion, sect or ethnicity is," he said.

Highlighting the ordeal of Syrian Kurds who fled to Suruç, Oktay said half of them were children and "victims of a great tragedy in Syria."

"They thank Turkey for its hospitality but are also concerned about winter. They worry the tent camp we set up in Suruç will not endure winter conditions. We are now planning to build a new accommodation facility and its construction is scheduled to be completed before winter. This new center will provide them protection from winter," he said.