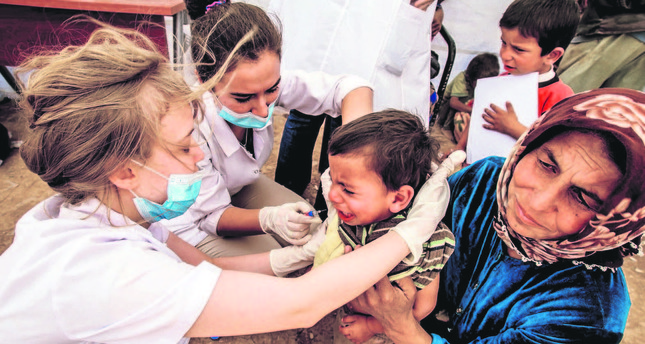 Turkish authorities, aware of the polio and measles threat in Syria, initiated an inoculation campaign for the 18,000 Kurdish children who fled to Turkey from Kobani

The inoculation campaign against measles and polio initiated by the Şanlıurfa Health Department for Kurdish children under the age of 15 who fled to Turkey has reached 18,000, according to officials.

Şanlıurfa Public Health Manager Osman Koyuncu said their focus was on Kurds who fled to Turkey from the Islamic State of Iraq and al-Sham (ISIS) terror.

They had established eight teams on the border and were providing health services for the elderly and the young, he said. Almost half of those who fled to Suruç on the Syrian border had moved on to different regions of Turkey, said Koyuncu, and that their medical teams were in contact with the rest.

"We have been active since the first day the people from Kobani started arriving in Turkey. We knew that polio and measles are diseases still common in Syria and that's why we took serious precautions," he said.

Moreover, refugees in Suruç had 24-hour access to family clinics set up in the town, he said.

The Şanlıurfa Municipality over the weekend took Kurdish refugees in Suruç to Turkish baths in the town with specially allocated public buses. In order to resolve bathing needs of the Kurds living in the temporary shelters in Suruç, the municipality opened a previously dormant Turkish bath in the town.

Officials said the free of charge bath would remain open and refugees would be taken to it regularly.

The Suruç Municipality is also initiating a campaign to address the clothing needs of the refugees, distributing shoes, jumpers and other essential garments as the weather in the region gets cooler. The Disaster and Emergency Management Authority of Turkey (AFAD) and the Şanlıurfa Municipality have also conducted a survey to determine who needs wheelchairs and started distributing to those in need.

AID FOR THOSE ACROSS THE BORDER

Meanwhile, AFAD announced yesterday that it had sent 46 truck-loads of humanitarian supplies across the border from Suruç for Kurds who have not crossed into Turkey.

AFAD spokesman Doğan Eşkinat said the aid sent over to Syria for those who fled from Kobani in the past month was worth TL 700 million ($311 million). AFAD alone is feeding 50,000 of the refugees who crossed into Turkey, said Eşkinat.

He said since the start of the refugee flow from Kobani, state and civilian aid groups had mobilized 3,000 people who worked around the clock to address the needs of Syrian Kurds.

"No matter what their religion, creed, language or race, we are extending our hand of compassion to everyone who comes to Turkey," he said.