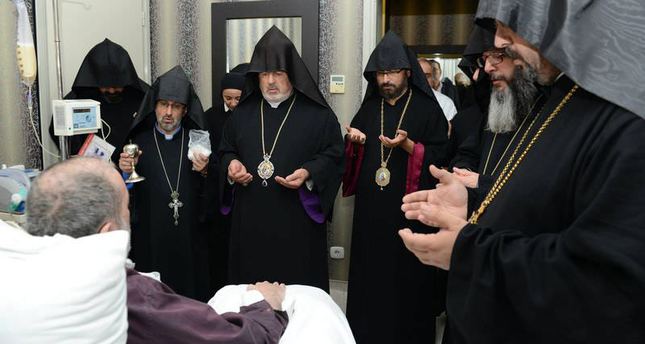 by Daily Sabah Oct 21, 2014 12:00 am
The lengthy absence of Mesrob Mutafyan, the Armenian Orthodox Patriarch in Turkey, due to his illness, has fueled a debate in the country's Armenian religious community regarding whether the patriarch should be replaced with a successor.

Since Mutafyan, officially known as Mesrob II, began suffering from dementia in 2008, Archbishop Aram Ateşyan has been serving as the head of the church in his capacity as Patriarchal Vicar. A group of Armenian dignitaries have urged for an election of a new patriarch though Turkish laws prevent it since a new patriarch cannot be elected while his predecessor is alive. Another debate is over whether the new patriarch will be "a co-patriarch" or not.

Speaking to Daily Sabah, Bedros Şirinoğlu, president of the Yedikule Surp Pırgiç Hospital Foundation, which represents the Armenian community, said the community needed a new patriarch, "either a successor or a co-patriarch." He claimed that the majority of community members agreed with the election of a successor. Patriarchal Vicar Aram Ateşyan told Turkish daily Milliyet that the election was "up for debate" but the synod would have the final say on the matter. Şirinoğlu says that Armenians have no intention of removing Ateşyan from his post. "He can be a candidate. What matters here is holding an election," Şirinoğlu stated. "Ateşyan has been serving as an acting patriarch for seven years. You can't be an acting patriarch for seven years," he said.

Şirinoğlu said that his call for the election of a new patriarch has found broad support in the community including from the family of Mesrob II.

Since he was diagnosed with dementia, Mesrob II remains confined to a Turkish-Armenian hospital in Istanbul where he has been receiving treatment since 2008. He is the 84th patriarch of Turkey's Armenian Orthodox community and succeeded Karekin II in 1998.