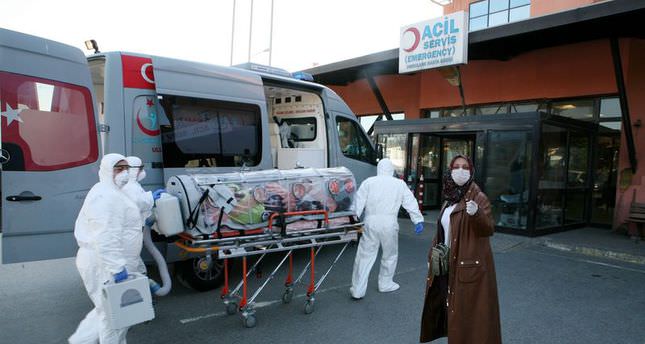 by AA Oct 21, 2014 12:00 am
A suspected coronavirus patient forced a lockdown at an Istanbul hospital's emergency room for several hours on Tuesday, health officials said.

The emergency service of the Eyüp public hospital was quarantined after a 73-year-old woman coming back from Saudi Arabia exhibited coronavirus symptoms. The woman came to the emergency department of the hospital with complaints of high fever and nausea.

The woman, identified only by her first name, Feride, was eventually isolated in a special ward at the hospital, and the service was reopened.

The patient had just returned from hajj. Close contact is believed to be the way the disease is communicated.

Releasing a statement on the issue, the Istanbul Governorate said the patient's condition was improving but she would be monitored further in the hope of a full recovery.

Another female pilgrim was hospitalized in Istanbul after exhibiting potential coronavirus symptoms and initial diagnosis showed that she had the virus although health authorities have not verified yet whether she suffered from the virus.

Middle East Respiratory Syndrome (MERS), commonly known as coronavirus, was first reported in 2012 in Saudi Arabia. It has been found in camels in Saudi Arabia, Oman, Qatar and Egypt. According to the World Health Organization (WHO), the lethal virus has claimed at least 317 deaths.

Because the disease posed a particular risk during hajj, Saudi Arabia said it had taken precautionary measures to prevent an outbreak.

A Turkish worker who returned from Saudi Arabia became the first Turkish casualty of the virus as authorities announced last week that the man died on Oct. 11 at a hospital in the southern Turkish province of Hatay where he was being treated.

Also on Tuesday, a third suspected patient was identified in Adana, a city in the south of Turkey, again a Turkish traveler from Saudi Arabia. The 60-year-old patient is currently being treated at a hospital which was briefly quarantined. It was reported that a female patient was also being monitored as a possible coronavirus case in the southern city of Antalya following her return from the Hajj.

Already on high alert after the Ebola virus outbreak in some African countries, Turkish authorities have recently stepped up measures against coronavirus. The Health Ministry ordered the screening of some 59,000 pilgrims who traveled to Saudi Arabia this year as well as those who traveled for umrah or lesser pilgrimage that can be performed at any time of the year unlike the hajj. Neighborhood clinics will monitor returning pilgrims for 14 days against symptoms of coronavirus.