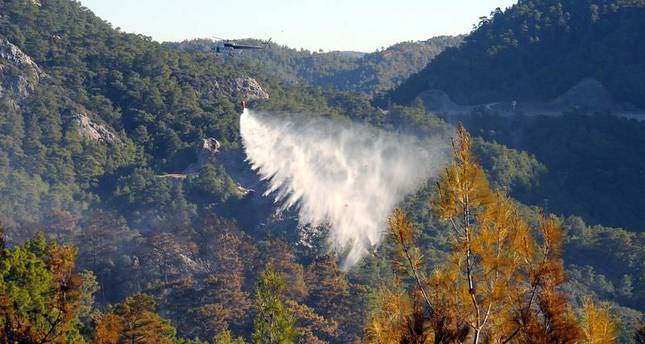 by Daily Sabah Oct 21, 2014 12:00 am
Turkish firefighters managed to extinguish a devastating forest fire in Marmaris, a popular district among vacationers in the southwestern Turkish province of Muğla, hours after it broke out on Sunday evening.

Scores of trucks, helicopters, firefighters flocked to the area after the blaze engulfed the Beldibi neighborhood of Marmaris on Sunday. The fast-spreading fire, which came worryingly close to residences, was put out only yesterday morning.

An area of 44 hectares was destroyed by the fire that got out of control due to strong winds. Investigating the cause of fire, Turkish authorities detained the owner of the house where a gas cylinder accidentally exploded, causing the fire.