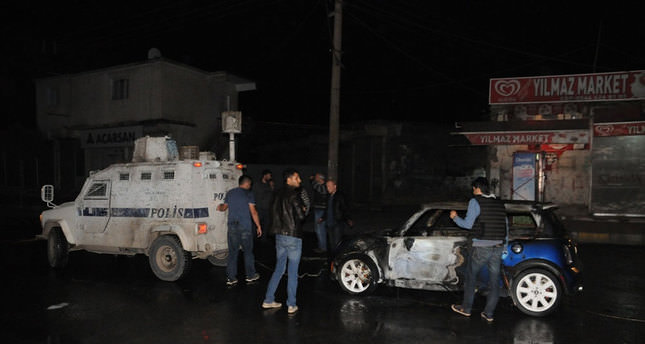 by Daily Sabah Oct 22, 2014 12:00 am
Tensions between Kurdish groups have shown no signs of abating after yesterday's killing of a member of HÜDAPAR, an opposition party known for its opposition to the terrorist organization PKK, and a riot in southeastern Turkey.

Fethi Yalçın, 35, was gunned down yesterday morning as he was leaving his home in Karlıova, a district in the eastern Turkish province of Bingöl. Critically injured with 5 bullets, he succumbed to his wounds in hospital. The father of four was a member of the Free Cause Party (HÜDA PAR) which recently became a target for pro-PKK groups accusing it of having ties with the Islamic State of Iraq and al-Sham (ISIS). Turkish police launched a manhunt to find the gunmen.

According to the eyewitness reports, the assault was carried out from a vehicle with long barreled rifles.

Also in Karlıova, Cengiz Tiryaki, another member of HÜDA PAR, died of his wounds on Monday sustained in an armed attack by a pro-PKK group on Oct. 9.

Bingöl's provincial chief of police and his subordinates were also attacked on Oct. 10 and two police officers were killed in the attack, while the attackers were captured dead in a car after a gunfight with security forces.

PKK affiliates have taken to the streets over the past few weeks under the guise of protesting Turkey's alleged inaction over Kobani, a Syrian Kurdish town near the Syrian-Turkish border where ISIS militants are fighting an armed Kurdish faction. Protests immediately turned into riots before evolving into a PKK campaign targeting HÜDA PAR and at least 36 people were killed. Most of the 36 people were either HÜDA PAR members or those regarded as supporters of the party.

Although riots across Turkey have died down considerably since last week, riots resurfaced on Tuesday night in Cizre, a town in the southeastern province of Şırnak.

Mask-wearing pro-PKK groups blocked streets in the town and set up "a checkpoint." Stopping a car bearing the license plate of another city, rioters set the vehicle on fire while the driver managed to flee. Assailants escaped when riot police arrived at the scene.

Doğan Altınok, the driver of the car, told reporters that people who stopped his car asked him questions in Kurdish. "I told them I didn't speak Kurdish. They were angered and asked me 'how come you don't speak Kurdish?' Then they smashed the car's windows. I tried to stop them but then one of them tossed a Molotov cocktail through the broken window. I got out and ran away," he said.

Similar riots had gripped Turkey in the second week of October when rioters set public buildings, shops and cars on fire all across the country.