Famous Turkish actors and actresses to 'reconciliate' for peace resolution 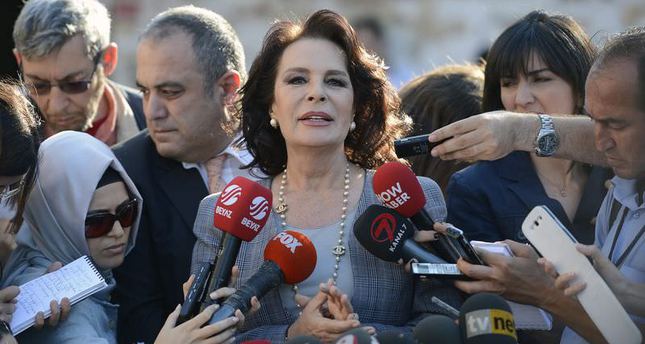 by AA Oct 25, 2014 12:00 am
History has regularly seen cases where entertainers wade into politics, using their name and famous faces to speak out on the environment, back humanitarian causes or champion an electoral candidate.

From recently deceased U.S. comic Robin Williams entertaining American troops abroad, to musicians like Roger Waters and Brian Eno calling for ?cultural boycott' of Israel and celebrities such as Bono and Oprah Winfrey endorsing Barack Obama in his 2008 presidential campaign, there is no shortage of celebrities using their fame for political ends.

Turkey is seeing this phenomenon too as high-profile actors and singers become a channel for communication between the Turkish government and the country's Kurdish radicals.

In the four-decade conflict between Ankara and the separatist PKK movement, Kurdish and Turkish singers, artists and actors have voluntarily acted as a channel between the sides, often using their unique status to 'take the temperature' of the Kurdish radicals.

The 'wise men' committee-made up of 63 writers, academics, columnists and actors-travelled across Turkey's seven provinces in 2013, assessing public opinion on the Kurdish issue and finally delivering a report to then prime minister Recep Tayyip Erdoğan in June 2013.

Now this committee has been recalled by current PM Ahmet Davutoğlu in the wake of violent nationwide protests of the Kurdish radicals over the war in Syria.

During their efforts across Turkey, the 'wise men' met and listened to local people, religious leaders and scholars.

One of those wise men was Hülya Koçyiğit, 66, a prominent film actor and a famous face from the 'Yesil Çam' heyday of Turkish cinema.

"People welcomed us with open arms, pleaded with us to help put an end to terror in the country. They asked us to act as a go-between government and the [separatist] PKK so there would be no more weeping families," she tells the Anadolu Agency.

Koçyiğit said the latest street protests put a spoke in the wheel of solution process: "That's why the wise men committee is back on track," she says.

Radical Kurds across Turkey have protested against the government's perceived lack of military support for the Kurdish Syrian town of Kobani, which has been under siege from the self-proclaimed Islamic State of Iraq and Sham (ISIS) militants.

Koçyiğit says that, this time, the 'wise people' were not tasked with any mission in their recent meeting with Davutoğlu. She adds that the government wanted to listen to their opinions and plan future contributions to the ongoing 'reconciliation process' between Ankara and the Kurdish radicals.

Davutoğlu, speaking last Sunday, told the group: "We need you to awake the social and collective conscience as the issue cannot be settled solely by mind and reason."

During Sunday's meeting Koçyiğit stressed the need for "softer instruments" to encourage dialogue. Fellow Turkish actor, Kadir Inanir, 65, came up with an idea of making films related to the reconciliation process.

Abdullah Öcalan, the outlawed PKK's jailed leader, has said the government's wise men committee meetings mean that the reconciliation process has entered a new and hopeful phase, according to a statement released by the pro-Kurdish Peoples' Democratic Party (HDP).

"The presence of actors and actresses in the committee is a sort of promotion of the reconciliation process; they are not expected to produce solutions but rather draw attention to the process," says Nevzat Tarhan, a psychiatric specialist professor at Üsküdar University in Istanbul.

However, Tarhan-also a retired army colonel-criticized the committee's composition of what he terms "likeminded people", adding that what was most important is that government and opposition parties find a common ground for the peace process.

Atilla Sandikli, president of the Istanbul-based Wise Men Center For Strategic Studies (not affiliated with the wise men committee), said the body played an important role in transmitting the message of the people to the government, making their voice heard and their demands visible.

Sandikli emphasized the importance of the wise people's getting in touch with citizens whom he thinks will be key to achieving a successful end to the solution process.

A 'wise man'-Yilmaz Ensaroğlu, one of the directors of the Ankara-based SETA think-tank-said actors influenced people: "They are influential enough to change people's political and social views."

Ensaroğlu recalls how award-winning Kurdish actor and director Yilmaz Erdoğan met university students who became energized by what he was saying about the peace process.

It is a far cry from U.S.-style politics-where an ageing film icon like Charlton Heston can campaign against gun control, or Clint Eastwood can interrogate an empty chair at a Republican Party gathering-but Turkish actors and artists may prove to be one of the best hopes for unity and reconciliation in Turkey.