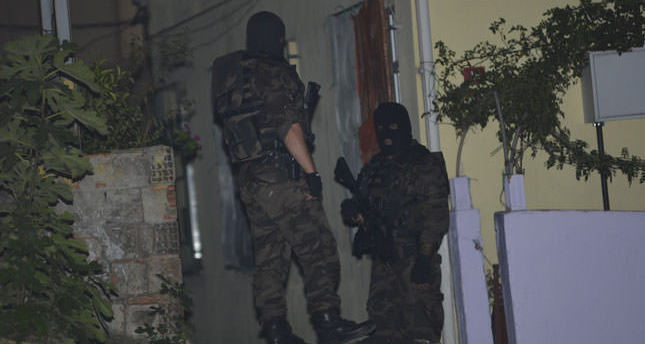 Acting on intelligence that the terrorist organization DHKP-C may carry out attacks in the country, Turkish police have raised the threat level while 13 people were arrested in an operation against the group in Istanbul on Friday

The terrorist Revolutionary People's Liberation Party-Front (DHKP-C) put Turkish police on high alert after the National Intelligence Directorate (MİT) issued a confidential report stating that it may carry out armed attacks in the capital Ankara and Istanbul.

Intelligence reports warn that militants armed with AK-47 rifles and light anti-tank weapons were plotting attacks "in critical locations" in both cities and may attempt to conduct attacks in other cities as well.

According to intelligence reports, Murat Korkut, a suspect in a rocket attack on the Justice and Development Party (AK Party) headquarters in Ankara last year, may enter Turkey illegally with other militants from Greece where they are in hiding. Korkut was also accused of acting as a spotter in the organization's non-lethal attacks against the Turkish National Police headquarters and the Ministry of Justice building. Korkut's photo was distributed to police units in all cities.

Korkut was taken into custody in Thessaloniki, Greece in February in an operation against DHKP-C members but was later released after Greek police questioned him and he disappeared.

MİT and Greek intelligence services are tracking down Korkut with MİT suspecting that he may have entered Turkey recently with a forged passport along with other militants.

In its warning to the police, MİT said they could carry out lethal attacks in big cities like Ankara and Istanbul and urged the police to step up security measures.

Security measures are being elevated especially in government buildings in Ankara as well as embassies and the number of guards on duty has been increased.

Korkut's accomplices in the attacks against the Turkish National police buildings and the Ministry of Justice were captured in Turkey and Greece after the attacks.

In a related development, Istanbul police launched raids in several locations in Sarıyer, a district on Istanbul's European side, on Friday against the DHKP-C and thirteen suspects were detained in the raids. Police also seized four pistols and two rifles in the raids. Several Sarıyer neighborhoods are known for housing supporters of the DHKP-C who often stage riots on the streets and clash with police. The DHKP-C is known for inciting violent riots during the Gezi Park protests in 2013 and a series of smaller riots in Okmeydanı and Sultangazi districts where it has support.

Founded in the late 1970s, the Marxist-Leninist DHKP-C was designated a terrorist organization by Turkey, the U.S. and EU. Under the name of Dev Sol (The Revolutionary Left) until 1994, the organization claimed responsibility for a series of high-profile murders, including the assassination of two politicians in 1980. The group also killed several Turkish intelligence officials. In 1994, it became the DHKP-C after Dev Sol splintered. The group's terror activities remained relatively minor compared to the PKK, another terrorist organization targeting Turkey, but it attempted to make a comeback in recent years by exploiting mass protests to launch attacks against security forces.

Apart from attacks in government buildings in 2013, the DHKP-C has also claimed responsibility for a suicide bombing at the U.S. embassy in Ankara in February 2013 that killed a Turkish guard.