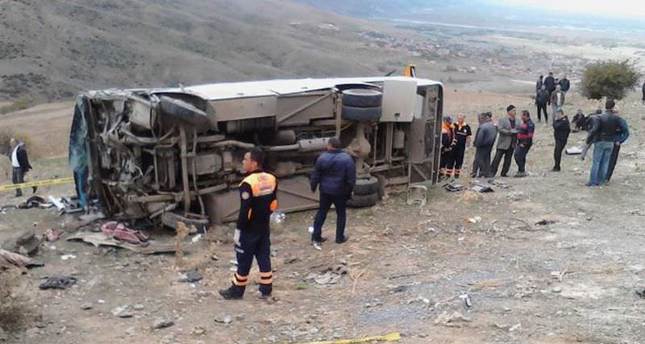 by Daily Sabah Oct 26, 2014 12:00 am
A school bus carrying students from the Isparta Süleyman Demirel University Yalvaç Vocational School to the central Anatolian town of Eskişehir on Saturday plunged into a ravine in the province of Afyonkarahisar, killing eight and injuring 19.

According to reports the accident happened when the driver of the bus lost control of the vehicle while traveling near the village of Çay. The driver was among the injured. Reports said all eight of those who died were students and their bodies were sent to their home cities for burial yesterday.

It was later revealed that the driver had used an old village road to shorten the trip by 50 kilometers rather than traveling by the newly completed Akşehir highway. Families of the students have filed a complaint against the driver and the firm organizing the tour.
Last Update: Oct 27, 2014 2:39 pm
RELATED TOPICS