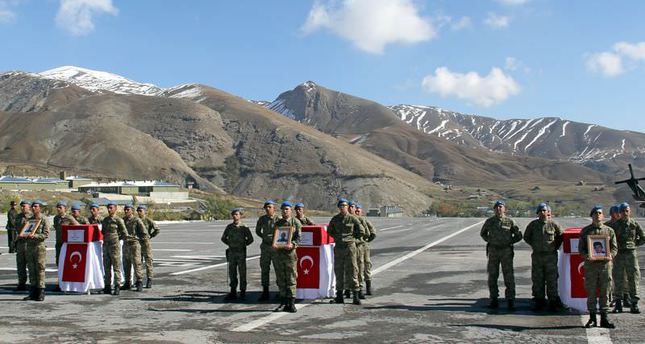 Two privates and a noncommissioned officer are shot while off-duty by suspected PKK members in Yüksekova. Six suspects are detained by the security forces that launched an investigation after the attack

Three soldiers – one noncommissioned officer and two privates – were gunned down by the outlawed PKK on Saturday in the Yüksekova district of the southeastern province of Hakkari.

The three gendarmerie soldiers, privates Yunus Yılmaz and Ramazan Köse and non-commissioned officer Ramazan Gülle, were serving at the 34th Border Brigade. The three, who were out shopping for supplies, were shot in the backs of their heads by two masked attackers at 4:00 p.m. All three were taken to the nearby Yüksekova State Hospital but died of their wounds.

Security forces that were placed on alarm after the attack initiated a military operation at the Orman and Kışla mountains at the outskirts of the town.

Yılmaz's father, Saim Yılmaz, told news agencies that he had served in the village guard against the PKK for a decade and that he had talked to his son the day before. Saim Yılmaz said: "I asked about his health. He told me he purchased a telephone for his mother and would be sending it our way. This heartbreak is shared by the whole nation."

Prime Minister Ahmet Davutoğlu, speaking after the attack said it was carried out by people who wanted to create chaos in the country. Davutoğlu said, "When one considers what is happening in Kobani and all its background, it is obvious that this attack is a planned provocation instigated by certain internal and external groups."

He called on the whole nation to unite against the attack and that he had ordered the security forces to initiate the necessary operations to find the culprits. "They will pay for what they have done. Let no one be under the illusion that the nation and the state will tolerate such attacks. We will not allow chaos to reign in the country," he said.

The PKK, which has been waging an armed campaign for independence since 1984, is blamed for the deaths of more than 40,000 people and is designated as a terrorist group by Turkey, the U.S. and EU. The group's leader Abdullah Öcalan, who is serving a life sentence on İmralı Island in the Marmara Sea, has been in dialogue with Turkish officials for the past few years as part of the government-initiated reconciliation process. The process, which aims to satisfy Kurdish demands for cultural and political rights in order to establish peace, has been one of the main points of focus for the government. However, the PKK leadership established in the Qandil Mountains in Northern Iraq has been aggressive and the group's members have carried out frequent attacks against the process and carried out armed attacks against military outposts in recent months.

The PKK's Syria wing, the Democratic Union Party (PYD), which has been battling the Islamic State of Iraq and al-Sham (ISIS) in Kobani, has also been waging a smear campaign against Turkey, accusing it of supporting ISIS. Turkey's efforts against ISIS, such as allowing 150 Kurdish peshmerga fighters and 1,200 Free Syrian Army (FSA) members access to Kobani, has drawn opposition from the PYD leadership, which is seen as trying to extend its military influence in northern Syria. The PYD, which cooperated with the Assad regime, does not want interference from either the FSA or the Kurdistan Regional Government (KRG) in Northern Iraq, experts say.

Davutoğlu, when asked about the attack's effect on the reconciliation process, said: "The process does not mean giving into terrorists. Our interlocutors in the region are the people in the southeast and their legitimate representatives."

President Recep Tayyip Erdoğan, in a letter he sent to Chief of General Staff Gen. Necdet Özel, extended his condolences to the military and the families and friends of the three soldiers.