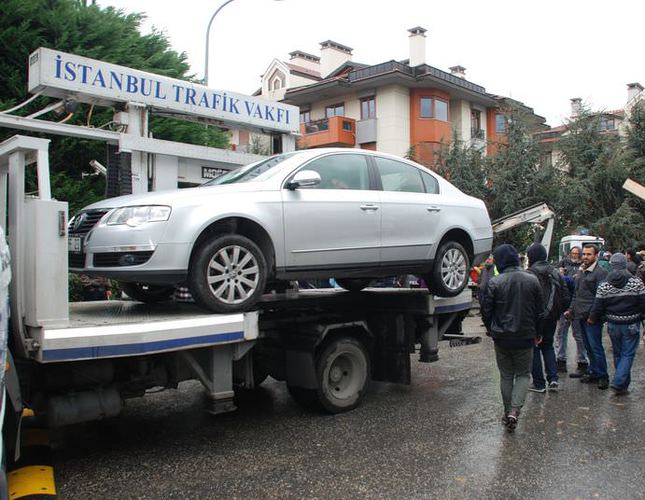 by Daily Sabah Oct 27, 2014 12:00 am
A new type of protest has emerged from the highly debated construction site of the mosque near the Validebağ Grove of Istanbul's Anatolian side, with protesters turning a local issue into a politically-charged confrontation. Protesters parked their cars covering the road on Monday to block the excavation trucks going in and out of the construction site. Traffic police arrived shortly after fining about 10 vehicles for illegal parking; some vehicles were towed away with their drivers inside.

Controversy over the grove first started during the March 30 local election campaigns which had passed as a very tight race in Üsküdar. Current Mayor Hilmi Türkmen of the Justice and Development Party (AK Party), revealed his plan to turn the grove into a more active area before the elections. However, some locals from nearby neighborhoods rejected this idea, joined by the opposition Republican People's Party (CHP) candidate İhsan Özkes and minor protests were held to keep the grove untouched. Prolonged renovations and landscape works in Adile Sultan Mansion and Validebağ Hospital also added to the tension around the area as many people claimed that the grove was turning into a construction site, leading to protests in August.

When the construction of the mosque began in an area belonging to Üsküdar Municipality adjacent to the grove, which was used as a parking lot by local residents, the mood was already tense, and footage of some trees and small plants being cut down or moved from the construction site early in the morning, as well as controversial statements from both parties, did nothing to help, instead increasing the tension.

Mayor Türkmen said that the protests have nothing to do with nature or environmentalism, but it is politicizing the issue, intolerance against religion and mosques, sparking further anger on the opposing side, while bringing the issue to a national level.

The grove, mansion and facilities currently being used as a teacher's lodge, belong to the Education Ministry. Though not directly inside the grove, the large area of the adjacent Validebağ Hospital is also considered as part of the grove itself.

Minister of Environment and Urban Development İdris Güllüce said the construction of the mosque was "legal" and he had "difficulty understanding protesters' concerns." "If they are concerned about the environment, it will not harm the environment in any way," he said. Güllüce stated that the protest was the "result of a manipulation of the issue."

Güllüce said it is natural that there would also be protests against the protesters. "A mosque, a place of worship is a social need as much as people's need for a clinic or a public building. Local authorities obviously responded to a public demand. It is meaningless to oppose what the people demanded," he said. The minister called on the protesters to act with common sense and respect the public's demands. He also dismissed the claims that the construction was greenlit despite a court verdict and said it was "also a part of a manipulation." "If it was illegal, it wouldn't be approved," he added.

Summing up the debate, Güllüce said there were two groups of protesters, "one opposing the mosque and another group, a misled one, protesting the alleged 'massacre of trees,' " he said. Güllüce said although some protesters were in Validebağ to "sincerely voice their concerns about the environment," there were "provocateurs manipulating the issue" among them.