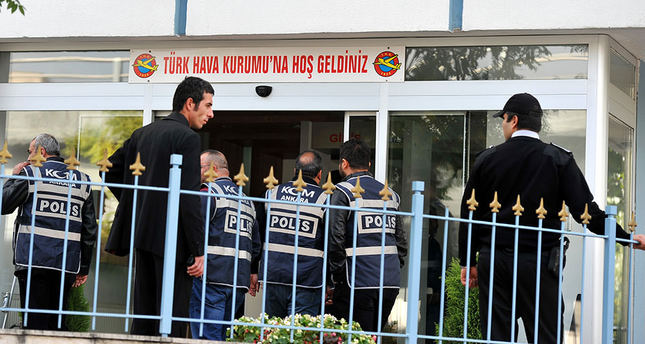 by Daily Sabah Oct 28, 2014 12:00 am
Osman Yıldırım, president of Turkish Aeronautical Association (THK), a non-profit, state-run organization, was detained along with nine other officials and Yıldırım's acquaintances yesterday for "irregularities" in the association. Two other suspects remain at large. Yıldırım was detained in his residence yesterday morning. Turkish media reported Yıldırım's detention came after the confidential designs of Türkkuşu (Turkish Bird), a domestic-made light airplane, was leaked on social media websites, though no official explanation has been made yet. Yıldırım is a retired Turkish Air Forces general who was elected as the association's chairman in 2009.

Officers from the Turkish National Police's financial crimes unit searched the THK headquarters in the capital Ankara. A company that is a subsidiary of THK is also being searched by the police. The company provides airplane maintenance services.

Türkkuşu, an entirely Turkish make plane with the exception of its engine, is a two-seat light plane. It was scheduled to be introduced at an air show last month but its demonstration was later scrapped due to a certification issue regarding the plane.

Turkish media outlets also claimed that Yıldırım and other suspects were under police surveillance for six months and were accused of bribery in tenders regarding air ambulances sold to the Health Ministry and hot-air balloons in popular tourist resorts. The financial crimes unit is also looking into the financial assets of the suspects.

İsmail Çanak, a press spokesman for the THK, told reporters that Osman Yıldırım was not allowed to make a press statement. "We will issue a further statement on the issue. Currently, we are investigating allegations regarding Türkkuşu, the leaking of its designs on social media," he said.