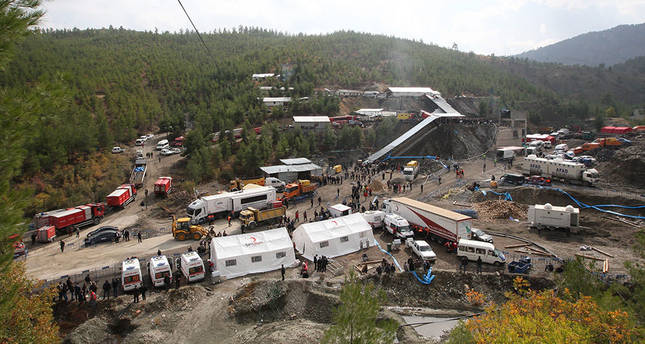 by Daily Sabah Oct 28, 2014 12:00 am
Eighteen workers at a coal mine in the Ermenek district of Karaman province in central Turkey were trapped when a gallery they were working in flooded yesterday.

Murat Koca, governor of Karaman, told reporters that over 40 miners were in the area at the time of the incident and were evacuated but others were stranded in the mine shaft.

Koca said water accumulated inside the mine and caused the workers to be trapped, search and rescue crews were deployed to safely evacuate the miners and the floodwaters in the mine were being drained.

Crews from the Prime Ministry's Disaster and Emergency Management Authority (AFAD) and Turkish Hard Coal Enterprises (TTK) – a state-run mining company – headed to the site to recover the trapped workers.

Minister of Energy and Natural Resources Taner Yıldız and Minister of Transportation and Communications Lütfi Elvan are scheduled to travel to the mine to coordinate the efforts.

Şakir Uyar, an official from the mining company, told A Haber TV that it would take a couple of days to entirely drain the water from the mine while televisions broadcast images of a long line of miners holding a lengthy pipe used for draining the water.

The cause of the flooding was not yet known. Experts point to two possibilities – either a leak from an old mine that the mine was built around or accumulation of underground water due to negligence.

President Recep Tayyip Erdoğan called Koca after the incident to learn about the developments. He ordered the governor to mobilize all resources to rescue the workers.

Local media had reported that the mining companies decided to suspend operations in September after new regulations improving work safety and allegedly putting a financial burden on companies in favor of workers, were implemented.

In 2003 a methane gas explosion at a private-run mine in Ermenek killed 10 workers. In May Turkey witnessed the deadliest mining disaster in its history in Soma, a town in western Turkey. A fire broke out at the mine and killed 301 miners. Several mining company officials were arrested for work safety negligence that led to the mass deaths.