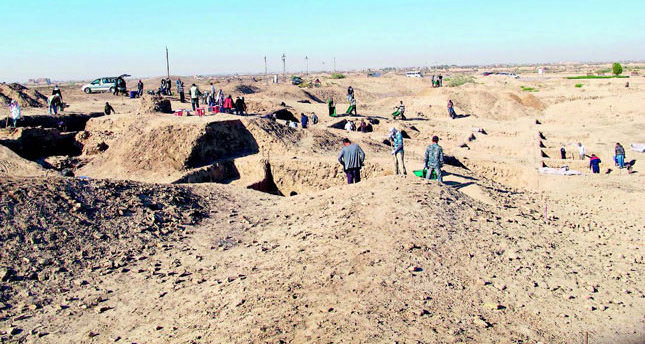 Academics from Turkey and Turkmenistan are cooperating to find the grave of Seljuk Sultan Alp Aslan, whose military exploits ushered an era where Turks and Turkish dominated Anatolia

Turkish archaeologists are trying to find the grave of Seljuk Sultan Alp Arslan, who defeated the Byzantine Empire at Malazgirt in eastern Turkey in 1071 and, as a result, began Turkish occupation in Anatolia.

Alp Arslan, who was killed in 1072 at the age of 43 and buried somewhere near the ancient city of Merv in central Asia, is seen as the conqueror who was personally responsible for allowing the Turkification of Anatolia with his historic victory.

Led by professor Halit Çal from Ankara Gazi University and professors Osman Eravşar and Haşim Karpuz from Konya Selçuk University, Alp Arslan's grave is the focus of the two-month dig in 42 separate points in an area of 2,500 square meters.

Eravşar said historical resources pointed to Alp Arslan's grave being located in the courtyard in front of the Cuma Mosque in Merv. "There are four Cuma mosques in the city. We believe the grave is located at the Macan Cuma Mosque," he said.

Eravşar said the city had been sacked many times over the centuries and the latest conquerors, the Russians, had removed numerous buildings from the city.

Karpuz said they had found the courtyard of the mosque during their digs. The initial excavations will conclude at the end of the month. Scientists from Turkmenistan are also aiding the 28-person team from Turkey. The research began after Turkey and Turkmenistan signed a protocol agreement. The Turkish International Cooperation and Development Agency (TİKA) are supporting the project. Once found, a mausoleum will be erected at the site.