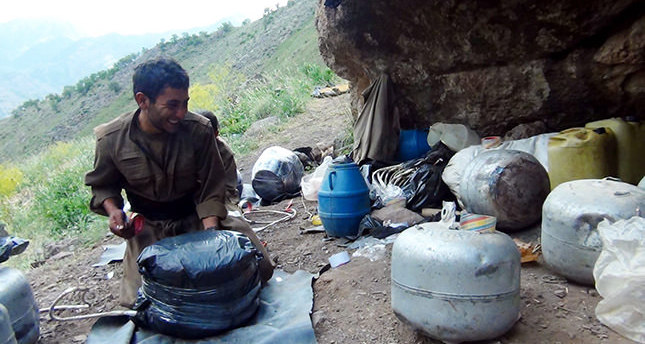 Terrorists had hijacked a truck laden with 400 kilograms of ammonium nitrate from a private coal mine in Silopi, a district in the southeastern Turkish province of Şırnak, near the Turkish-Iraqi border.

An unknown number of militants stopped the truck as it was leaving the mine, holding up the driver at gunpoint. After loading its cargo onto another truck, they released the driver and fled the scene with the truck.

Releasing a statement, the Turkish military said four commando teams, an attack helicopter and a manned surveillance jet were dispatched to the area to locate and retrieve the explosives.

Speaking about the incident, Deputy Prime Minister and government spokesman Bülent Arınç said militants seized "one of three trucks" in the coal mine and headed to Mount Cudi, a mountain between central Şırnak and Silopi, where the PKK has hideouts in the rugged territory. Arınç said private guards were providing security for the mining company's trucks and "it apparently was an insufficient security measure as security forces found out about the incident long after they hijacked the truck." Arınç said the army successfully located the truck's likely destination in Cudi and hoped to capture the truck before it reached its intended location.

Ammonium nitrate, mainly used in agriculture, is also commonly used in the mining sector. Its wide availability makes it a prime target for terrorists looking to build bombs by using the highly explosive substance. It was the ingredient used in the explosives that blew up an FBI building in Oklahoma in 1995 and a 2011 car bombing in the Norwegian capital Oslo. Experts say 400 kilogram of the substance is enough to create a powerful enough explosion to raze a building to the ground.

The terrorist organization, which had significantly ceased its activities in recent years, stepped up its attacks again, apparently in an effort to deal a blow to the reconciliation process, a series of reforms and negotiations to end the bloody conflict the PKK started some three decades ago under the pretext of obtaining Kurdish self-rule in Turkey. Last week, three Turkish soldiers were killed in Yüksekova, a district of Şırnak's neighboring Hakkari, by the PKK militants targeting three off-duty men.

The PKK has made its presence visible over the past two months by opening harassment fire on troops and murdering dozens of civilians and two policemen. The terror attacks came at a time that the terrorist organization sought to drum up support for one of its Syrian Kurdish affiliates fighting the Islamic State of Iraq and al-Sham (ISIS) in Syria's Kobani.