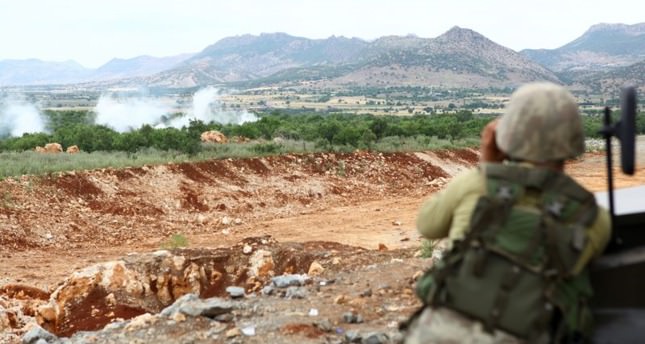 by Daily Sabah Oct 29, 2014 12:00 am
A Turkish soldier was on Wednesday fighting for his life in hospital after being shot by two masked gunmen in Turkey's southeastern city of Diyarbakir, the army said.

Non-commissioned officer Nejdet Aydoğdu was out shopping with his wife in central Diyarbakir when he was fired at by the gunmen at close range, it said in a statement.

He was hospitalised in intensive care with life threatening injuries, it added.

The army did not say who committed the attack.

However it had earlier reaffirmed that a simular attack at the weekend which killed three soldiers in Yuksekova in the mainly Kurdish Hakkari province was carried out by the Kurdistan Workers' Party (PKK).

That attack was also committed by masked gunmen in a busy street at a similar afternoon time.

The PKK has waged a three-decade insurgency for self-rule and greater rights in southeast Turkey but largely observed a ceasefire since March 2013 amid a fragile peace process.

The PKK's armed wing this week issued a statement denying responsibility for the Yüksekova attack and some analysts believe the group may be split over its strategy in the peace process.