Divers unable to enter the flooded mine to save workers 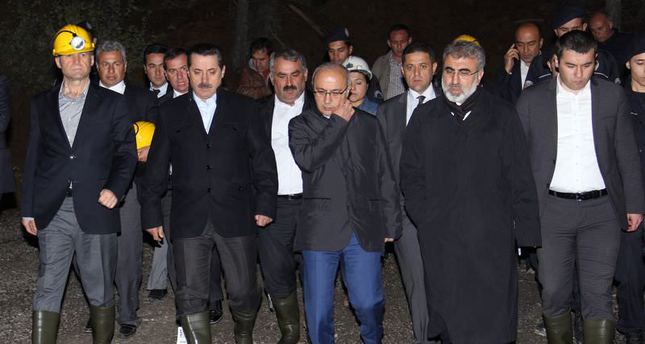 by AA Oct 29, 2014 12:00 am
Divers have been stopped from risking their lives in attempts to save trapped workers in a flooded mine in central Turkey's Karaman province, Energy and Natural Resources Minister Taner Yıldız said Wednesday.

The miners got trapped Tuesday when a water pipe inside a private lignite mine exploded near the Ermenek town in Karaman province, around 400 kilometers south of Ankara. Earlier reports suggested there were at least 40 miners trapped inside, but latest figures from the minister revealed there were in total 34 miners, out of whom 18 remain stuck.

About the difficulties in the search-and-rescue mission, Yıldız told reporters that divers faced limited visibility in the flooded mine.

"The visibility distance in the water is not even one meter. Divers will not manage to dive even three or four meters, which will pose threat to their lives," the minister said.

Because of safety concerns for the divers, he added "we cannot instruct them to dive the flooded mine."

Earlier, the energy minister said the water inside the collapsed mine had begun to recede after rescue teams deployed a second pump to flush out the water.

"The pump we have newly set up has begun to yield results and the water level is falling. Not as quickly as we want, but it is falling," Yıldız said.

The Disaster and Emergency Management Authority of Turkey, or the AFAD, had said earlier that a 225-person team was on site for the search-and-rescue mission.

"Two aircraft, 20 ambulances and eight AFAD rescue vehicles continue their search-and-rescue efforts. One mobile base station has been set up at the scene and adequate food packets have also been delivered," it said Tuesday.

Apart from Yıldız , the Transport, Maritime Affairs and Communications Minister, Lütfi Elvan, and Labor and Social Security Minister Faruk Çelik are on the spot to monitor the situation.