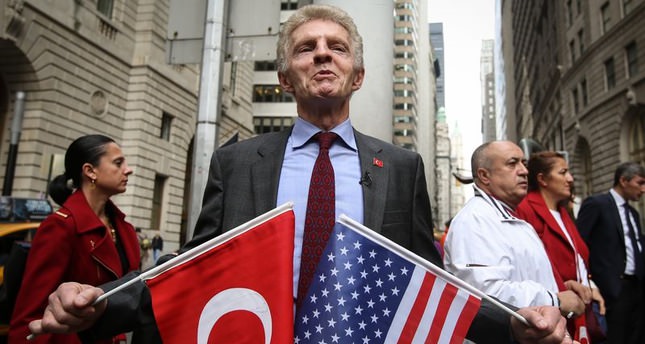 by Daily Sabah Oct 29, 2014 12:00 am
Billy Hayes, the writer of the controversial book "Midnight Express" for misrepresenting conditions in Turkey in 1978, raised the Turkish flag in New York during Turkey's Oct. 29 Republic Day celebrations on Wednesday.

In 1970, Hayes was arrested while attempting to smuggle 2 kilograms of Hashish out of Turkey and sentenced to 30 years in jail in 1970. After five years in Sağmalcılar and İmralı prisons, Hayes planned and successfully executed his escape from prison.

Following his return to America, Hayes wrote a book about his experiences in Turkish prisons called, "Midnight Express;" which was later adapted into a movie by director Alan Parker and screenwriter Oliver Stone with Brad Davis portraying Hayes on the big screen in 1978.

The film has been criticized by lots of people for misrepresenting Turkey and Turkish people, even Hayes himself said, "The biggest problem in the film is the fact that you don't see any good Turks at all in the movie. It creates an overall impression that Turkey is this terrible place and Turks are a terrible people. I actually loved Istanbul. I got along great with the Turks until I was arrested."

As Hayes stressed that he is proud of raising the Turkish flag on Turkey's 91st Republic Day and he said, "Even from the beginning I said that the film was not representing Turkey objectively, but my voice was weak, people just started to hear my words about the movie."
Last Update: Oct 30, 2014 9:40 pm
RELATED TOPICS