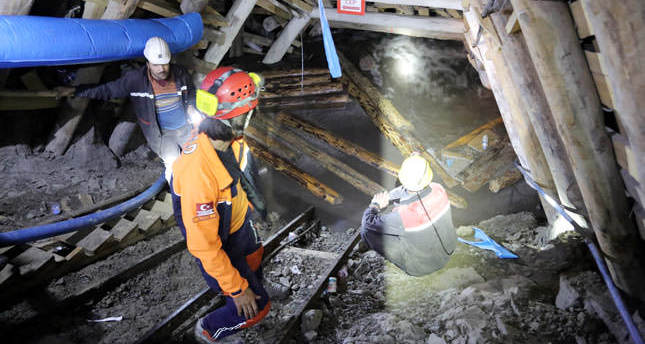 Amid fading hopes, Turkey awaits good news from the 18 miners trapped since Tuesday in a flooded mine in the town of Ermenek while Prime Minister Ahmet Davutoğlu vowed any case of negligence will be punished

Turkey held its breath yesterday and clung to hopes, which are dimming every minute, as the fate of 18 miners trapped in a flooded mine remains uncertain despite strenuous efforts to rescue them. On Tuesday, a tragedy unfolded in Ermenek, a small town in the central Anatolian province of Karaman, as news broke that miners were trapped underground due to a flood. Out of 34 miners working more than 300 meters below the surface, only 16 were able to get out as water began inundating the lignite coal mine. Search and rescue crews mobilized in order to reach the trapped miners since the accident occurred on Tuesday at noon, but the water that filled the galleries is hindering efforts. The cause of the flood in the privately run mine remains unknown, but speculations are abounding, though no official explanation has been made regarding the cause of the accident. Some media reports claim water from an old mine adjacent to the site leaked from a crack due to the lack of safety measures. Three government ministers arrived at the scene on Tuesday to observe and coordinate the efforts to retrieve the miners.

The Minister of Energy and Natural Resources, Taner Yıldız, who was at the forefront of search and rescue operations during the mine disaster in the western town of Soma in May, was accompanied by the Minister of Transportation, Maritime Affairs and Communications, Lütfi Elvan, and the Minister of Labor and Social Security, Faruk Çelik. Ministers talked to the families of the miners, miners who managed to escape the flood and company officials and updated reporters about the developments. Prime Minister Ahmet Davutoğlu and President Recep Tayyip Erdoğan also traveled to Ermenek yesterday.

Davutoğlu told reporters that search and rescue crews were immediately dispatched to the scene and are working incessantly to rescue the trapped miners. He said the water level dropped some 10 meters thanks to efforts.

The prime minister pledged that the accident would be investigated thoroughly and urged the media to "stay away from speculations about the cause."

"If the company or any (government) agency is at fault, we will do what is necessary," he said, adding that the current priority is "to retrieve our brothers safe and sound."

He stated that all aspects of the accident would be examined. He also noted that the government had already toughened job safety regulations after an elevator accident killed 10 workers in Istanbul last summer.

A grim Yıldız depicted the situation as troubling and voiced concerns about the workers trapped below. Yıldız had earlier said that the water levels dropped considerably thanks to around the clock draining, but he told reporters that it was still not enough to reach the miners.

As soon as crews arrived at the scene, a massive blue pipe was laid out to syphon the water immersing the main access shaft, and additional motor pumps were deployed to pump out the water. The Prime Ministry's Disaster and Emergency Management Authority (AFAD) oversaw the coordination of the search and rescue crews. In a written statement, AFAD said 420 people were at the scene for the search and rescue mission. An advanced motor pump -- called an octopus for its multiple drainage pipes -- arrived at the mine yesterday. The octopus can syphon out 8,500 liters of water per minute and can be extended as low as 60 meters. Yıldız said about 10,000 tons of water has accumulated in the area where the miners are trapped.

He said what they needed most urgently was a fast discharge of water. "Every passing moment is against us, and our hopes are fading with every passing hour. Unfortunately, the water level is above the spot where [the workers] are located," he said.

Yıldız and other ministers dismissed reporters' questions about the possible cause of the incident and said authorities are focused on rescue efforts.

Yıldız said divers attempted to comb the water, but the visibility was "not even one meter," and divers had to turn back. "They could not manage to dive any further, otherwise, their lives would be in danger," he said. The minister also averted questions about when the water could be drained out entirely. "We don't know when, but I can say that the water levels have receded. Still, it won't be an easy task," he said.

Elvan said water combined with sludge posed a challenge to siphoning out the water, and pipes were occasionally clogged, although they replaced them with new ones in time. "All relevant agencies mobilized their efforts, but it is difficult to work underground. You cannot put all motor pumps at the same time and at the same location as the mine shaft is too narrow," he said.

A few hours after the accident, an official from Has Şekerler, the company running the Ermenek mine, told Turkish media that workers could only hold out for two or three hours, as they were only equipped with oxygen masks.

The Ministry of Labor and Social Security overseeing the inspection of mines had announced that the mine was last inspected in June, and inspectors handed down fines to company owners due to eight separate cases of safety negligence. The mine was shut down for three months after the inspection, and the company was allowed to reopen it after those shortcomings were addressed. In September, the mine owner shut it down again after a new law in favor of miners was implemented, complaining that the law increased the operating costs. Yet, it was reopened again earlier this month.

The lack of safety in mines has been under scrutiny in Turkey,

Last month, the government implemented a new regulation that requires mines to deploy measures to ensure the safety of workers in case of an accident. The regulation obliges mining companies to provide a safe passage in case of a collapse, methane gas explosion or any other industrial accident. If the mines are not geographically suitable to provide a gateway, they will be required to place oxygen mask stations between galleries and exits to the surface.